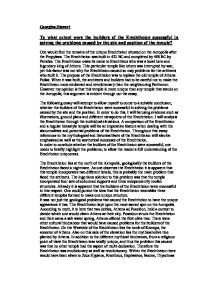 To what extent were the builders of the Erechtheion successful in solving the problems caused by the site and position of the temple?

A more obvious factor is that ionic columns are more efficient in delicate and elaborate temples as there reduce the surface area taken up by the column thus creating more space, thus one would be correct when stating from the deduced evidence that the builders of the Erechthieon were successful in solving the problems caused by the position of the Erechtheion. When discussing the aesthetical success of this elevation it is important to incorporate the mythical and geological aspects that could dictate the construction of the Erechtheion. As highlighted throughout this essay the ground levels were of different levels, however when observing this elevation it is noticeable that the levels of (a) and (b) are not incredibly noticeable, considering the geological hindrance. This success is further evident in the frieze, the north and east columns are different at different, roughly two and half inches, however the amazing carved ornaments take away the focus of the unlevelled structure and allows this temple to appear continuous. This idea however was not a new concept. Again it was used in the construction of the Parthenon, the steps at the entrance of the Parthenon have a major dip in the centre, and this is due to the fact that from any position around the Parthenon the steps appear straight. The idea that symmetry and equality resembles perfect ness was a concept used by the builders of Erechtheion. From this analysis of the east elevation I can deduce from the diagram and the above information that the builders were successful in solving the problems caused by the position and site of the Erechtheion. ...read more.

The ionic columns do not extent completely to the ground. This would be due to the fact that it would appear abnormal and out of place. Thus the columns only extended half way down the temple. Finally another architectural susses is that there is a column missing on the colonnade marked (c). This is allows the colonnade to appear continuous, if the column had been visible it would make the Erechtheion look as if the colonnade was out of proportion. Conclusion From the extrapolated evidence given from the analysis of each elevation of the Erechtheion and the analysis of its mythical and religious background it is apparent to a certain extent that the builders of the Erechtheion were successful in solving the problem caused by the site and position of the temple. It is my opinion, that the builders of the Erechtheion were successful as they used subtle and ingenious methods when dealing with the difference in levels in the Erechtheion. Further evidence for its success was that problems such as this did not hinder the production of an amazing temple, which still managed to satisfy the requirements of all the mythical and geological factors. Further more; the builders of the Erechtheion through out the construction of the temple respected the traditional methods of architecture but at the same introduced "striking innovations". The only aspect of the Erechtheions construction that raises doubt to its success was the dictation of the holy and mythical artefacts. Yet personally I do not think that the abandonment of the traditional symmetrical method leads to the result that it was unsuccessful, I see it of a sign of respect even sympathy with the religious purpose of the Erechtheion. ...read more.