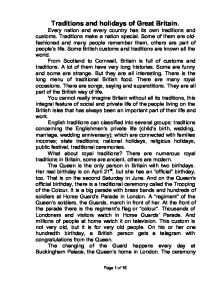 Traditions and holidays of Great Britain

Traditions and holidays of Great Britain. Every nation and every country has its own traditions and customs. Traditions make a nation special. Some of them are old-fashioned and many people remember them, others are part of people's life. Some British customs and traditions are known all the world. From Scotland to Cornwall, Britain is full of customs and traditions. A lot of them have very long histories. Some are funny and some are strange. But they are all interesting. There is the long menu of traditional British food. There are many royal occasions. There are songs, saying and superstitions. They are all part of the British way of life. You cannot really imagine Britain without all its traditions, this integral feature of social and private life of the people living on the British Isles that has always been an important part of their life and work. English traditions can classified into several groups: traditions concerning the Englishmen's private life (child's birth, wedding, marriage, wedding anniversary); which are connected with families incomes; state traditions; national holidays, religious holidays, public festival, traditional ceremonies. What about royal traditions? There are numerous royal traditions in Britain, some are ancient, others are modern. The Queen is the only person in Britain with two birthdays. Her real birthday is on April 21st, but she has an "official" birthday, too. That is on the second Saturday in June. And on the Queen's official birthday, there is a traditional ceremony called the Trooping of the Colour. It is a big parade with brass bands and hundreds of soldiers at Horse Guard's Parade in London. A "regiment" of the Queen's soldiers, the Guards, march in front of her. At the front of the parade there is the regiment's flag or "colour". Thousands of Londoners and visitors watch in Horse Guards' Parade. And millions of people at home watch it on television. This custom is not very old, but it is for very old people. ...read more.

On October 31st British people celebrate Halloween. It is undoubtedly the most colourful and exciting holiday of the year. Though it is not a public holiday, it is very dear to those who celebrate it, especially to children and teenagers. This day was originally called All Hallow's Eve because it fell on the eve of All Saints' Day. The name was later shortened to Halloween. According to old beliefs, Halloween is the time, when the veil between the living and the dead is partially lifted, and witches, ghosts and other super natural beings are about. Now children celebrate Halloween in unusual costumes and masks. It is a festival of merrymaking, superstitions spells, fortunetelling, traditional games and pranks. Halloween is a time for fun. Few holidays tell us much of the past as Halloween. Its origins dateback to a time, when people believed in devils, witches and ghosts. Many Halloween customs are based on beliefs of the ancient Celts, who lived more than 2,000 years ago in what is now Great Britain, Ireland, and northern France. Every year the Celts celebrated the Druid festival of Samhain, Lord of the Dead and Prince of Darkness. It fell on October 31, the eve of the Druid new year. The date marked the end of summer, or the time when the sun retreated before the powers of darkness and the reign of the Lord of Death began. The Dun god took part in the holiday and received thanks for the year's harvest. It was believed that evil spirits sometimes played tricks on October 31. They could also do all kinds of damage to property. Some people tried to ward of the witches by painting magic signs on their barns. Others tried to frighten them away by nailing a piece of iron, such as a horseshoe, over the door. Many fears and superstitions grew up about this day. An old Scotch superstition was that witches - those who had sold their souls to the devil - left in their beds on Halloween night a stick made by magic to look like themselves. ...read more.