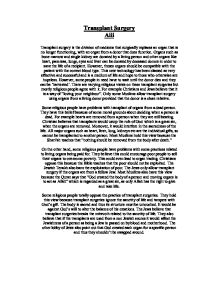 Transplant Surgery Aiii Transplant surgery is the division of medicine that surgically replaces an organ that is no longer functioning, with an organ from a donor that does function. Organs such as bone marrow and single kidney are donated by a living person and other organs like heart, pancreas, lungs, eyes and liver can be donated by deceased donors in order to save the life of a recipient. However, theses organs should be compatible with the patient with the correct blood type. This new technology has been classed as very effective and successful and is a medium of life and hope to those who otherwise are hopeless. ...read more.

They have this belief because of some moral grounds about deciding when a person is dead. For example hearts are removed from a person when they are still beating. Christian believes that transplants would usurp the role of God which is a great sin, when the organs are removed. Moreover, it would interfere in the sacredness of the life. All major organs such as heart, liver, lung, kidneys etc are the individual gifts, so cannot be transplanted to another person. Most Muslims hold this view because the Shari'ah teaches that "nothing should be removed from the body after death." On the other hand, some religious people have problems with some practices related to living organs being paid for. ...read more.

Some religious people totally oppose the practice of transplant surgeries. They hold this view because transplant surgeries ignore the sanctity of life and tampers with God's gift. The body is sacred and thus its structure must be untouched. It would be against God's will to alter the balance of his creations. The Jews believe that transplant surgeries breaks the mitzvoth related to the sanctity of life. They also believe that if the transplants are used from a non Jewish source it would affect the Jewishness of a person as being a Jew is passed on by blood and motherhood. The other lobby of Jews also point out that God created each organ for a specific person and thus they shouldn't be swapped around. ...read more.