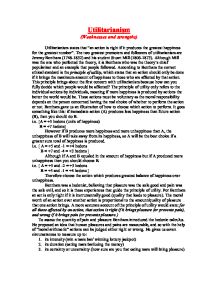 Utilitarianism (Weaknesses and strengths) Utilitarianism states that "an action is right if it produces the greatest happiness for the greatest number". The two greatest promoters and followers of utilitarianism are Jeremy Bentham (1748-1832) and his student Stuart Mill (1806-1873). Although Mill was the one who perfected the theory, it is Bentham who was the theory's chief popularizer and an example that people followed. According to Bentham the correct ethical standard is the principle of utility, which states that an action should only be done if it brings the maximum amount of happiness to those who are affected by that action. This principle brings about the first concern with utilitarianism because how can you fully decide which people would be affected? The principle of utility only refers to the individual actions by individuals, meaning if more happiness is produced by actions the better the world would be. These actions must be voluntary as the moral responsibility depends on the person concerned having the real choice of whether to perform the action or not. Bentham gave us an illustration of how to choose which action to perform. ...read more.

This noble character can be very hard to achieve though so it's not a very sufficient solution. Consequences also play a very important role because decisions are made according to the calculation of those consequences. The rightness of an action depends on its producing the greatest balance of happiness over unhappiness and this involves the action's effects. In most circumstances it is impossible to calculate all the consequences of that action and so it is impossible to know the greatest net happiness produced. You might be able to predict what consequences the action would have in short amount of time but because you can't predict the future you cannot know all the possible outcomes. An example could be drawn up for this - a doctor saves both a child and mother in a difficult birth. His concluding words are, "You'll be alright now Mrs. Hitler." - a utilitarian doctor would think that he would be making a lot of people happy by following the utility principle. The problem, however, is that he couldn't predict the future, and therefore made the wrong decision because Hitler ended up killing millions of Jews. ...read more.

If you did that, you would not be taking into account the benefit or happiness of the greatest possible number of people. Utilitarianism is scientific and impartial - make quantitative measurements and apply the principle of utility, giving no special treatment to ourselves, or anyone else because of race, gender and religion. It is an objective theory- it affords you a method for calculating how you should act regardless of personal confusion. Unlike most other ethical theories, utilitarianism has the apparent advantage that it includes in its range not only rational - i.e. human - beings, but all sentient beings, which can experience pain and pleasure. So, animals are not left out by utilitarian ethicists and cruelty toward animals can be consistently condemned by utilitarian theory. I think I have presented a sufficient amount of strengths and weaknesses in the utilitarianism theory to make an educated opinion on whether it is a good theory to follow. Overall the general idea is very good and it makes a lot of sense but it isn't really good enough to judge on the decisions that will affect the rest of your life, but it can work with small decisions e.g. should you have a mars bar all to yourself or share it with another person? Written by Diana Rough L6-6 ...read more.