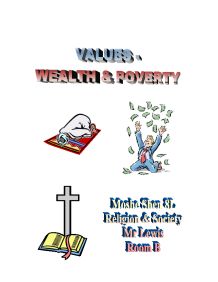 CONTENT FRONT COVER 1 CONTENT 2 CHAPTER ONE - Right and Wrong 2 CHAPTER TWO - How do Religions Teach What is Right and Wrong? 2 CHAPTER THREE - What are our Values and are there Common Value that we can agree on? 2 CHAPTER FOUR - Wealth and Poverty 2 APPENDIX 2 Appendix 1: The Ten Commandments 2 Appendix 2: My own Ten Commandments 2 INDEX 2 BIBLIOGRAPHY 2 CHAPTER ONE - Right and Wrong We always hear people saying "this is right and that is wrong" or "it's good or evil". Though looking at the same thing, different people will give completely different answers. Therefore, it's a relative but not absolute concept between right and wrong. It is a personal opinion when people judge the things right or wrong. In other words, the opinion is not objective but subjective though people's judgments are usually based on the truth. Basically, 'right' means just, proper, or morally correct, in accordance with accepted ideas of what is good. By contrast, 'wrong' is not correct, not in accordance with the facts or the truth. Comparing to right, 'good' is morally right, in accordance with religious standards. For example, people who do good deeds and lead a good life will go to heaven. In contrast to good, 'evil' is not good morally, it's wicked1 and harmful. Morality is in regarding to what is right and what is wrong. Different from the animal, our human beings are able to think and judge the things morally and choose the right way to behave ourselves. Take the September 11th terrorist event for example. Both George W. Bush and Osama Bin Laden said it's the Holy war. So both sides think themselves right, and god will be on their own side. The opposition is evil, and themselves is 'good'. Bin Laden killed many innocent people in the Twin Tower crash on September 11th 2001, which is a very bad thing to do. ...read more.

The prophet Muhammad told that Muslims should constantly remember and submit to God by praying five times each day, wherever they are. By contrast, the Christians do not pray regularly, but at occasions, usually when they are in trouble, they pray and wish for God's help. CHAPTER THREE - What are our Values and are there Common Value that we can agree on? Value is defined as the usefulness, helpfulness, or importance of something, especially in comparison with other things. There are a variety of values on many different things and issues. Different religions may have a common on the values of some issues but disagree on the others. Both Christians and Muslims believe that the universe was created by God or Allah, and God gives people the responsibility of looking after the environment, which includes both natural environment and animals. For example, Islam teaches that 'Earth is green and beautiful, and Allah has appointed you His stewards over it' (Qur'an, 6:165). Consistent with Islam, Christianity teaches his people that 'The world was created by God and is an expression of his love. As children of God, we have a responsibility to care for it'. But they also have different rules on some issues, such as having animals as food. Although both Christianity and Islam have an agreement on the protection of animals, Islam demands his people to do not eat some animals, such as pig. By contrast, there is no such limiting on food in Christians though some Christians choose to be vegetarian. There is a controversy on some issues between religion teaching and modern social issues. One of the big issues is environmental protection. On the one hand, religion people, such as Muslin, are taught to look after environment which Allah created for them. On the other hand, the people are doing things which are harmful to their environment, e.g. air pollution produced by motorists. ...read more.