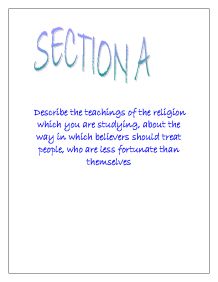 Describe the teachings of the religion which you are studying, about the way in which believers should treat people, who are less fortunate than themselves SECTION A World's major religions teach that their God wants a happy, healthy and good life for everyone. The religions also teach that the followers should try and make the world a better and equal place for themselves and others to live in. Despite these beliefs and teachings the world today is still a place where there are many people poor and suffering whilst others have wealth and luxurious living conditions. In the world today there is a division between the rich and the poor. Generally, it is seen for the richer people to be living in the north of the Equator and the poor in the South. There is an enormous difference in the lifestyle of the rich and poor. People in rich countries have many problems such as over eating which causes obesity and for which they have to loose weight by simply eating less. Housing for the richer is both safe and warm. Everyone living in a richer country has access to pure, clean water. For the rich when fashion changes, their wardrobes change's which are usually filled with unworn clothes which they throw away, many people have different types of clothing for specific different occasions which means spending more money. Many rich people can be educated for as long as they wish, therefore also have a range of jobs for which they can apply for suiting themselves. In addition, to this every being living in the richer world has some type of health service provision provided for them. However, on the other hand in the poorer world, the developing countries there is often a daily struggle for food which often inadequate. Many, people young and old suffer from starvation. Many also suffer from diseases caused by malnutrition plus, 1.1 billion people do not have access to clean and safe water. ...read more.

their love and concern for the poor in many various ways such as; they may devote their lives into working with a developing country, as an aid worker in a refugee camp. If they cannot devote their whole lives to work with the poor the may work with them over a short period of time. They could also stay where they are and support and help a charity fund. An example of this is the Iona Fund. The Iona fund was founded by George MacLeod in 1938in the island of Iona. He later on built a centre 'The George MacLeod centre', which was opened for the purposes of providing a place where young people from all over the world could come and live for a period of time in a community. When they are not working they follow a regular pattern of worship and study as well as having social enjoyment with other people in the community. The worship in the Iona community focuses on social concerns around the world. This is reflected in ways such as in daily prayers. "Here is a gaping sore, Lord: half the world diets, the other half hungers..." (Prayer by John Bell, of the Iona Community- from the SPCK Book of Christian Prayer) The community members come from all stages of life; many are persuaded to come to Iona by or for personal or spiritual reasons. Most of the community members work away from Iona, these members then return to Iona for one week per year. They come back for the week to give a proportion of their income to the community. A Christian could also make an effort by simply living in simple life style, meaning they could only buy what is actually needed and the money they save could be given into charity. They could also help buy giving unwanted, discarded clothing, books, shoes, toys etc in to charity for someone needy to use rather than just throwing it away as part of rubbish. ...read more.

God invites all people to accept the moral teachings of the Qur'an as a model whereby mercy, compassion, tolerance may be experienced in the world. In Surat al-Baqara verse 208, this command is given: You who believe! Enter absolutely into peace (Islam). Do not follow in the footsteps of Satan. He is an outright enemy to you In this verse it explains, people will experience well-being and happiness by living according to the moral teaching of the Qur'an. In the Qur'an it teaches to bring peace, happiness and justice to the world. Therefore, it also say's to treat other with love, manners, care and loyalty no matter what ones race, culture, height, looks or beliefs are. A small minority in each faith would say that they have a responsibility to the believers of their own religion and faith first. A minority of Christians such as the Evangelical Christians that they should take care and help their own faith first and then they may go on to helping others of other beliefs. In this case neither religion deny helping any other being of other faith however they believe they should sort out their own individual faith first before going on to helping others. Christians believe in this as Jesus taught that there is no difference between any beings, in the bible it says; "There is no difference between Jews and Gentiles, between slaves and free people, between men and women; you are all one union with Christ Jesus" (Galatians 3.28) Christianity also teaches to love and care for others. As in the bible it teaches it is impossible to a have a genuine love for God whilst at the same time you ignore the people in need. In addition, to this Jesus also taught "always treat others the way you would like to be treated". In my view, it is quite clear that all teachings of all religions teach love, care, loyalty and respect for one another. In addition to this all religions teach to bring peace to the world therefore I sturdily believe that the statement is wrong. ...read more.