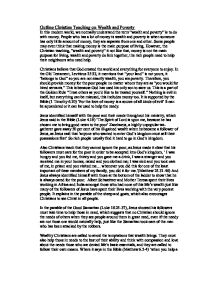 Outline Christian Teaching on Wealth and Poverty In this modern world, we normally understand the term "wealth and poverty" is to do with money. People who has a lot of money is wealth and poverty is when someone has only little amount of money, they are separate from one and other. Some people may even think that making money is the main purpose of living. However, the Christian teaching, "wealth and poverty" it not like that, money is not the main purpose for living, wealth and poverty do link together, the rich people need to help their neighbours who need help. Christians believe that God created the world and everything for everyone to enjoy. In the Old Testament, Leviticus 25:23, it mentions that "your land" is not yours, it "belongs to God" so you are not exactly wealth, you are poverty. Therefore, you should provide money for the poor people no matter whom they are as "you would for hired servants." This is because God has used his only son to save us. This is a part of the Golden Rule "Treat others as you'd like to be treated yourself." Nothing is evil in itself, but everything can be misused, this includes money too. It is supported by the Bible (1 Timothy 6.10) 'For the love of money is a source of all kinds of evil' It can be squandered or it can be used to help the needy. Jesus identified himself with the poor and their needs throughout his ministry, which Jesus said in the Bible (Luke 4.18) ...read more.

For example sub-Saharan Africa pays back four times as much money on the loans that it has from the USA as it spends on medicine. This leads them becoming poorer. Over 40 countries are heavily in debt. They owe over �150 billion. Much of the money borrowed was wasted or stolen by corrupt governments and not for the original purpose. To pay their debts, countries have to use valuable resources and land to grow their own food. At the same time people are starving to death. Poor countries are also faced is that they have to pay their debts in hard currency. If their currency goes down in value then it is worth fewer dollars, euros or pounds. It is a vicious circle, because the poor countries get poorer they borrow more money to pay off their debts, this is the debt spiral into which poorer countries are drawn making them hard to become independent. As a result world debts should be cancelled or at least reduced. This is the most significant way to help the poor countries Therefore there needs to be a lot of world development so that we can get rid of all the unfairness in the world. This is why we need a development. Analyse and explain the work of one Christian agency working for world development The Catholic Agency for Overseas Development is a major British Catholic agency that has been fighting third world poverty since 1962 and set up by the Catholic bishops in England and Wales. CAFOD works in partnership on over 1000 programmes. ...read more.

Without those a rich in other countries to help them will make it impossible to avoid this risk. On the other hand people should be all equal, so if one person is rich, the others should be rich too to start with. According to Christians all people should be equal; no matter you are women or men, rich or poor. On the whole, the statement 'There should be rich people as long as there is poverty in the world' is neither wrong nor right, but people should not use their money to bully people, in fact, they should help each other because God said each time when you helped one of his family member, you were helping him. The most important point is not just how much money you have got, is how you use it. Because trouble is all these money while sometimes it can be used wrongly by corrupt government. However we still need the rich because with money comes power, and power can be useful, as in Bob Geldarf who was the head figure in the company 'Make Poverty History'. Which follows what Jesus said that 'the poor will always be with you', but they should be help. Nevertheless help does not mean just giving them money; they needed education, time to listen and building houses or schools etc too. And in the Ten Commandments it mentions that we should 'treat others as you would like to be treated yourself.' What it really means is share your wealth, don't be greedy and help others. Because at the end of the day you cannot take your money with you. ...read more.