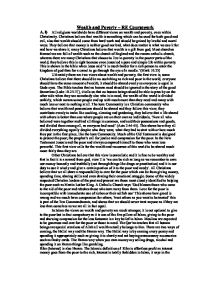 Wealth and Poverty - RE Coursework A. i) All religions worldwide have different views on wealth and poverty, even within Christianity. Christians believe that wealth is something which can be used for both good and evil, also that wealth should come from hard work and should be gained by lawful and moral ways. They believe that money is neither good nor bad, what does matter is what we use it for and how we share it, many Christians believe that wealth is a gift from god, Most churches themselves are full of wealth such as the church of England and the roman catholic church, whereas there are many Christians that choose to live in poverty in the poorer parts of the world, they believe this is right because even Jesus led a pure and simple life within poverty. This is shown in the bible when Jesus said 'it is much harder for a rich person to enter the kingdom of god than for a camel to go through the eye of a needle.' (Mark 10.25) Ultimately there are two views about wealth and poverty, the first view is, some Christians believe that there should be no such thing as rich and poor in the world, everyone should have the same amount of wealth, it should be shared evenly as everyone is equal in Gods eyes. ...read more.

Some of the widely respected Christian leaders of the past and present are those most closely identified to helping the poor such as Martin Luther King. A Catholic Church says 'God blesses those who come to the aid of the poor and rebukes those who turn away from them. Love for the poor is incompatible with immoderate use of riches or their selfish use' This shows how greed is wrong and we much have compassion for others, 'treat others as you want to be treated' this is part of the Ten Commandments, and shows that we should never treat anyone as if they are less than ourselves as we are all in fact equal. In Islam the views on wealth and poverty are much stronger, it is not optional to give to the poor but in fact compulsory as it is one of the five pillars of Islam, giving to the poor and showing compassion for the less fortunate is a key belief in Islam. Muslims are expected to be generous and care for the poor or those in need. The Qur'an teaches that all human beings are special creations of Allah all wealth actually belongs to him. There are two ways of earning; the Hallal way and the Haram way. ...read more.

'He who eats and drinks while his brother goes hungry is not one of us' (al Bukhari). From this we can see the instruction to care for the less fortunate. The month long fast ends with the festival of Eid ul Fitr, at this time Zakah-al-Fitr is given, the head of the household pays this for the other members of the family before reading the Eid prayer. At this time Muslims are expected to give generously to those in need, it is paid so that the poor can also celebrate along with other Muslims all over the world; the amount given usually represents the cost of a meal for each member of the family. There are two main voluntary ways of giving in Islam Sadaqah and Lilah. Lilah is giving money generally to the poor or helping to build a mosque or Islamic schools, Sadaqah which means sincere gift in Arabic is similar but it doesn't just have to be the gift of money it can be giving up your time, talent and skills and even just praying for the poor. The deeds most loved by Allah are those that are done regularly even though they may be small (Bukhari 76.472). Both religions Islam and Christianity believe powerfully in giving to the poor and not being greedy and selfish with wealth. Even if both religions have different ways of giving and different views. ...read more.