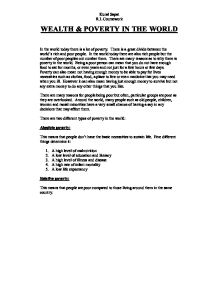 WEALTH &amp; POVERTY IN THE WORLD

WEALTH & POVERTY IN THE WORLD In the world today there is a lot of poverty. There is a great divide between the world's rich and poor people. In the world today there are also rich people but the number of poor peoples out number them. There are many reasons as to why there is poverty in the world. Being a poor person can mean that you do not have enough food to eat for months, or even years and not just for a few hours or few days. Poverty can also mean not having enough money to be able to pay for lives necessities such as clothes, food, a place to live or even medicine that you may need when you ill. However it can also mean having just enough money to survive but not any extra money to do any other things that you like. There are many reasons for people being poor but often, particular groups are poor as they are overlooked. Around the world, many people such as old people, children, women and racial minorities have a very small chance of having a say in any decisions that may affect them. There are two different types of poverty in the world: Absolute poverty: This means that people don't have the basic necessities to sustain life. Five different things determine it: 1. A high level of malnutrition 2. A low level of education and literacy 3. A high level of illness and disease 4. A high rate of infant mortality 5. A low life expectancy Relative poverty: This means that people are poor compared to those living around them in the same country. HINDU TEACHING ON WEALTH & POVERTY Hinduism has developed gradually over a period of about 1000 years, in the area of northern India. In Hinduism there are many different beliefs, values and teachings that are followed. There are many important leaders and teachings in Hinduism, but Hindus don't follow the teachings of any one person. ...read more.

As a result of the poverty in the world many people are suffering. There is a need in the world for the rich to help the poor, and if they did the world would be a better place. Although some countries may be considered as developed countries it does not mean that everyone is wealthy in those countries. An example is the UK, which is a developed country but not every person is wealthy. There are many that are homeless and have no family or money. Although there are many homeless people in the UK, it is still considered a wealthy country because only 20% of the UK's population is poor and the rest of the people are fairly rich. There is a lot of difference in the standard of living in the poor south and the rich north. This is the reason why many people in the rich north want to help the people in the poor south. The rich people provide this help by organising different charity groups that raise money and send it to the poor countries so that they can get enough medical care, food, clothes, and water to survive. In the UK there are well known charity groups such as Oxfam and Barnados. In the world there is a need for many more similar charities so that the world's poorer countries can become more developed. To help the world's poorer people there are many things that can be done. The world's richer countries help the poorer countries in many ways. 1. The rich countries can give financial aid (money), in which they give loans to poor countries. 2. They give food aid. The rich countries often have a lot more food than they need, so they can send food such as wheat, corn, flour, powdered milk and cheese to the poor countries. 3. There is emergency aid. When, disasters occur in poor countries like floods and earthquakes, the rich countries can help by sending blankets and food. ...read more.

He has now started the Templeton Prize, it is a prize worth more than the Nobel Peace Prize, it is given for progress in religion, he also gives to projects all around the world. He was knighted in 1987. These days a lot of rich people have been known to help the poor, by giving to charity. This proves that there is nothing wrong with have rich people. Although it would be better on the whole if there was equality and no rich or no poor, there is nothing wrong at all with rich people in the world. Many rich celebrities are active in calling on governments to do more to help the third world countries. We should be grateful to the rich people of the world because it is mainly the rich that help the poor. Another example of a person who has helped charity is Clive Lawton, he is a headmaster at a Jewish secondary school in Liverpool, he was also brought up on the basis of giving 10% of income to charity, he says that the welfare state has only existed for 100 years but Jews have had a welfare state for centuries. Also in the Shikshapatri written by Lord Swaminarayan it says that everyone should give 10% of their income or if they can't afford that 5% but everyone who earns money should give to charity. Also I think that there is nothing wrong with rich people in the world because the people that are rich have become rich by working hard and earning it, and therefore this should not be taken away from them. This is one of the main reasons that I do not agree with quotation. I mainly feel that there is nothing wrong with the rich in the world as long as they help the poor. This point is also written in the scriptures and holy books of many of the world's religions, and that is another reason that I feel this way. Kunal Sapat R.L Coursework ...read more.