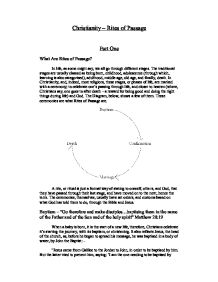 What Are Rites of Passage?

Christianity - Rites of Passage Part One What Are Rites of Passage? In life, as some might say, we all go through different stages. The traditional stages are usually classed as being born, childhood, adolescence (through which, learning is also categorised), adulthood, middle age, old age, and finally, death. In Christianity, and, indeed, most religions, these stages, or phases of life, are marked with a ceremony; to celebrate one's passing through life, and closer to heaven (where, Christians say, one goes to after death - a reward for being good and doing the right things during life) and God. The Diagram, below, shows a few of them. These ceremonies are what Rites of Passage are. A rite, or ritual is just a formal way of stating to oneself, others, and God, that they have passed through their last stage, and have moved on to the next, hence the term. The ceremonies, themselves, usually have set orders, and customs based on what God has told them to do, through the Bible and Jesus. Baptism - "Go therefore and make disciples...baptising them in the name of the Father and of the Son and of the holy spirit" Matthew 28:19 When a baby is born, it is the start of a new life, therefore, Christians celebrate it's starting the journey, with its baptism, or christening. ...read more.

Hymns are sung, and prayers said, to introduce the service, before the minister makes a tribute to the deceased. Then those who were close to the deceased will give a short speech, or eulogy, before another sermon is preached, and more prayers and hymns. Finally, the coffin will be taken to the cemetery for burial or cremation, and a final prayer will be said (which is where the famous "Ashes to Ashes, dust to dust" comes in), before the body is buried or burnt. Afterwards, there is usually a reception, where a toast is made to the deceased. Part Two Marriage (and Divorce?) - "Let marriage be honourable among all" Hebrews 13:4 In Christianity, marriage is sacred. A bond, which can, and should, never be broken. The joining of two persons, who become as one. As the bible says, in 1Corinthians 7:10-11: "a wife should not depart from her husband...and a husband should not leave his wife". It clearly states that separation, or even divorce, would be a sin. There are four main points, which Jesus identified, concerning marriage: - 1) Adultery is the only grounds for divorce - "whoever divorces his wife, except on the ground of fornication, and marries another commits adultery." ...read more.

The same goes for death (especially in this country, as has been explained above): if one has realised that they've lived a "sinful" life, they can make one last repentance, before dying. In that sense, through their death, they've been baptised, as it were. I suppose, though, really, it's down to the individual, and what s/he really feels. Personally, I wouldn't bother with the fuss of paying for a church to get married in, unless I really wanted to get married in one, and I had agreed with my fianc�e, what we wanted to do. Some people only do things to please others, or for ceremonial sake, either case, with no real personal feeling or regard, and I feel that this makes for unhappy circumstances. Unless a person is completely sure of what they are doing, should they decide that they want to do it at all, or in a Christian place of worship. If one strongly believes in Christianity, as Jesus would say, if his heart is in it, then that person is a Christian, whether baptised or not. But that is only one person's viewpoint, which is why the issue becomes a tricky one, as Christianity is dealing with millions of people's, and not just one, viewpoints. ...read more.