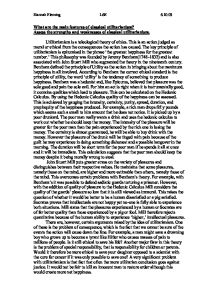 What are the main features of classical utilitarianism? Assess the strengths and weaknesses of classical utilitarianism. Utilitarianism is a teleological theory of ethics. This is an action judged as moral or ethical from the consequences the action has caused. The key principle of utilitarianism is epitomised in the phrase 'the greatest happiness for the greatest number.' This philosophy was founded by Jeremy Bentham(1748-1832) and is also associated with John Stuart Mill who augmented the theory in the nineteenth century. Bentham defined the principle of Utility as the action in bringing about the maximum happiness in all involved. According to Bentham the correct ethical standard is the principle of utility, the word 'utility' is the tendency of something to produce happiness. Bentham was a hedonist and, like Epicurus, believed that pleasure was the sole good and pain the sole evil. For him an act is right when it is instrumentally good, it contains qualities which lead to pleasure. This can be calculated on the Hedonic Calculus. By using the Hedonic Calculus quality of the happiness can be assessed. ...read more.

This overcomes certain problems with Bentham's theory. For example, with Bentham's it was possible to defend s******c guards torturing a prisoner. However, with the addition of quality of pleasure to the Hedonic Calculus Mill considers the quality of the guards' pleasure so low that it is still viewed as immoral. This raises the question of whether it would be better to be a human dissatisfied or a pig satisfied. Socrates proves that intellectuals are not happy yet no-one is fully able to experience both situations. Mill states that the pleasures experienced by a human or Socrates are of far better quality than those experienced by a pig or fool. Mill therefore rejects quantitative because of the human ability to experience 'higher,' intellectual pleasures. There are, however, certain arguments raised by the idea of utilitarianism. One of these is the problem of consequence, which is the fact that we cannot be sure of the events the action will cause down the line. For example, a man might save a drowning boy who grows up to become a tyrant like Hitler who causes masses of pain to millions of people. Is it still ethical to save his life? ...read more.

Another benefit is that everyone is treated equally and counting only as one in contrast to another person, no matter who they are. This raises the debate over whether certain people should be counted as more than another, for example a family member and whether all people are actually, as claimed, all treated as equals. We know that quality of pleasure is assessed and so the pleasure of someone in the wrong morally is not given equal weight to those in the moral right. The whole aim of utilitarianism is to produce the greatest good for the greatest number and it is true that the majority of pleasure is followed. This is a suitable conclusion in many situations but we have to consider whether this is always a good thing. W.D.Ross considered the duties he thought should be put beside happiness such as fidelity, justice, beneficence, self-improvement and nonmalificence. It is also not always beneficial to have constant majority rule as this excludes many minorities such as pressure groups like Greenpeace or previously the Suffragettes. It also excludes disabled people and could lead to eugenics as initiated by Hitler as he ethnically cleansed Germany of all Jews and other minorities. Hannah Fleming L6E 6.10.03 ...read more.