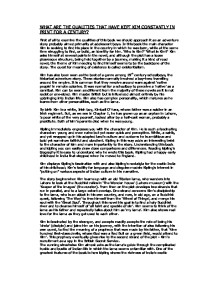 What Are the Qualities That Have Kept Kim Constantly In Print For a Century?

WHAT ARE THE QUALITIES THAT HAVE KEPT KIM CONSTANTLY IN PRINT FOR A CENTURY? First of all to examine the qualities of this book we should approach it as an adventure story probably aimed primarily at adolescent boys. In this book the main character Kim is seeking to find his place in the country in which he was born, while at the same time struggling to find, or build, an identity for him. 'Who is Kim?' 'What is Kim?' Kim asks himself at several points in the novel, and although the plot has a loose picaresque structure, being held together by a journey, making it a kind of road novel, the theme of Kim needing to find himself seems to be the backbone of the story. The quest for meaning of existence is called existentialism. Kim has also been seen as the best of a genre among 19th century schoolboys, the historical adventure story. These stories normally involved a boy-hero travelling around the empire. It is common that they revolve around wars against 'native people' in remote colonies. It was normal for a schoolboy to perceive a 'native' as a cannibal. ...read more.

And yet the two become interdependent. Kim's association with the lama provides him with an excuse to travel around India, and an ideal cover for his true role as a spy, while the lama often relies on Kim to do their begging and find them shelter, often physically leaning on Kim's shoulder as they travel. This relationship seems too perfect in some ways. Kim defines and creates his identity during his adventures by being open to influences; by responding positively to people he can look up to, while warding off influences that he finds harmful. His distinctive ability to ignore caste divisions and experience true freedom of motion allows Kipling to make a vision of India unrestrained by typical limits of perspective and prejudice. The motif of Kim's white blood further provides a unifying theme for the portrayal of India's struggle between British Imperialism and national pride. In chapter 5, when he finally finds the 'Nine hundred first-class devils, whose God was a Red Bull on a green field', (his father's old regiment - the red bull on a green field being their flag), he is captured by the soldiers and his instinct is to escape back to the lama at all costs. ...read more.

On the other hand, Kim is the only person in the novel who can see all the beauty in India and he happens to be a white man, thus implying that a nonwhite could not have the same vantage point. Therefore, empire is in the back of Kipling's mind at all times, even while attempting to escape from it in the most genuine settings in India. With Kim's indecisive and confusing identity it seems to allow him to move with ease between the white and non-white worlds of India and therefore succeed in the lama's and Kim's own quests. What I find about kipling's descriptions and insights into Indian life is that he draws a clear contrast between the people of India. Every Indian, whether they live in the plains or in the mountains are distinct. They are very much like portraitures and landscapes; they give the reader glimpses into people and places. This image of India adds something really special and unique to throughout the novel. This makes Kim stand out from other books. Even though these qualities give the plot an interesting insight into India, stories and hierarchy of races, what makes the story tick is those two simple characters. Kim and his lama. This is the real quality of the book and is unquestionable that this is a huge selling point. 1670 words ...read more.