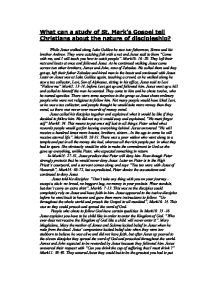 What can a study of St. Mark&amp;#146;s Gospel tell Christians about the nature of discipleship?

What can a study of St. Mark's Gospel tell Christians about the nature of discipleship? While Jesus walked along Lake Galilee he saw two fishermen, Simon and his brother Andrew. They were catching fish with a net and Jesus said to them "Come with me, and I will teach you how to catch people". Mark16: 16-20. They left their nets and boats at once and followed Jesus. As he continued walking Jesus came across two other brothers, James and John, sons of Zebedee. He called them and they got up, left their father Zebedee and hired men in the boats and continued with Jesus. Later on Jesus was at Lake Galilee again, teaching a crowd, as he walked along he saw a tax collector, Levi, Son of Alphaeus, sitting in his office. ...read more.

This means to put ones self last in all things. Peter asked what rewards people would get for leaving everything behind. Jesus answered "He will receive a hundred times more houses, brothers, sisters...In the age to come he will receive eternal life". Mark10: 28-31. There was a poor widow who went along to a temple and put in all the money she had, whereas all the rich people put in what they had to spare. She obviously would be able to make the commitment to God as she gave up everything, unlike Peter, who expected something in return. In Mark14: 27-31, Jesus predicts that Peter will deny him. Even though Peter strongly protests that he would never deny Jesus. ...read more.

"Who ever does not receive the Kingdom of God like a child will never enter it". Mary Magdalene, Mary the mother of James and Salome lacked belief in Jesus when he rode from the dead. Jesus' companions lacked belief also when they were too stubborn to believe he was alive and did not have faith, but after Jesus appeared to the eleven disciples they spread the word of God and preached throughout the world. James and John expected to be rewarded by Jesus because they followed him. Jesus answered their request with "Can you drink the cup of suffering that I must drink?" Mark11: 38-40. They assured Jesus they could but to be the greatest you had to put your self last and have the qualities of a disciple to be entered into the Kingdom of God. ...read more.