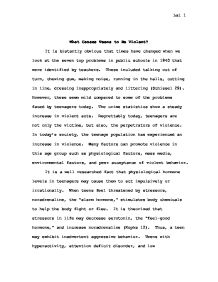 What Causes Teens to Be Violent?

What Causes Teens to Be Violent? It is blatantly obvious that times have changed when we look at the seven top problems in public schools in 1940 that were identified by teachers. These included talking out of turn, chewing gum, making noise, running in the halls, cutting in line, dressing inappropriately and littering (Schissel 29). However, these seem mild compared to some of the problems faced by teenagers today. The crime statistics show a steady increase in violent acts. Regrettably today, teenagers are not only the victims, but also, the perpetrators of violence. In today's society, the teenage population has experienced an increase in violence. Many factors can promote violence in this age group such as physiological factors, mass media, environmental factors, and peer acceptance of violent behavior. It is a well researched fact that physiological hormone levels in teenagers may cause them to act impulsively or irrationally. When teens feel threatened by stressors, noradrenaline, the "alarm hormone," stimulates body chemicals to help the body fight or flee. It is theorized that stressors in life may decrease serotonin, the "feel-good hormone," and increase noradrenaline (Kopka 12). Thus, a teen may exhibit inadvertent aggressive behavior. Teens with hyperactivity, attention deficit disorder, and low intelligence are thought to be more predisposed toward violence because they may lack basic ...read more.

In recent years, some movies view violence as a comedy. These films succeed in making us laugh at acts which should appall us. In 1999, two high school students in Columbine High randomly shot twelve classmates and a teacher (Associated Par.6). They wanted revenge and to become celebrities, because they had been bullied and mistreated by others in their school. Leonard Eron, a psychologist at the University of Michigan, says that kids learn by observation. "If what they observe is violent, that's what they learn" (Kelleher 72). Teens who don't yet understand the difference between illusion and reality may be highly affected by media violence. They might see a violent movie and decide to re-enact the scenes, thus causing harm to themselves or others. Environmental factors, such as the neighborhood and school, can also contribute to teenage violence. The culture of some neighborhoods provides opportunities for teenagers to learn and engage in violence. The presence of gangs and drug trafficking not only provides high levels of exposure to violence, but make it seem attractive to those who watch it. Ineffective parenting, violence in schools, high dropout rates, substance abuse, and high unemployment rates may all be factors in the decline of neighborhoods lacking effective social organization (Sadler 86). ...read more.

Youths committing violent acts may not think they are violating society's norms. They do not give it a second thought, and reject to values of their parent while accepting those of their friends. In Beccaria's argument in the utilitarian concept, he mentions that "all persons are motivated by pain and pleasure" (Deutschmann 132). If this ceoncept is extended to youths, then the degree of delinquency among youths should not be surprising. The youth feel pleasure in being a part of their group. When they feel that delinquency is an "acceptable" behavior within their environment, they will act accordingly. Their "free will" is not controlled by the morals and tenets of society around them. Violent crimes committed by youthful Canadians are increasing, and this is particularly worrying given the situation in the United States. Teenagers who are raised in a stable home environment with good guidance have the tools to cope with exposure to violence and emerge unscathed. There is little doubt that teenage violence is a major concern for communities and law enforcement agencies. Just coping with it may stem the tide for the moment, but the real solution lies in improving the conditions of neighborhoods and supporting parents in their desire to provide a strong moral base for young people. This would provide a better environment to counteract the effects of mass media, peer pressure and acceptance of violence behavior as the norms. ...read more.