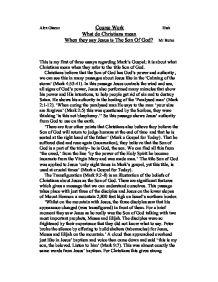 What do Christians mean When they say Jesus is The Son Of God?

Alex Giacon Course Work Hwk What do Christians mean When they say Jesus is The Son Of God? Mr Burke This is my first of three essays regarding Mark's Gospel; it is about what Christians mean when they refer to the title Son of God. Christians believe that the Son of God has God's power and authority, we can see this in many passages about Jesus like in the 'Calming of the storm' (Mark 4:35-41). In this passage Jesus controls the wind and sea, all signs of God's power, Jesus also performed many miracles that show his power and His intentions, to help people get rid of sin and to destroy Satan. He shows his authority in the healing of the 'Paralysed man' (Mark 2:1-12). ...read more.

The title Son of God was applied to Jesus 'only eight times in Mark's gospel, yet this title, is used at crucial times' (Mark a Gospel for Today). The Transfiguration (Mark 9:2-8) is an illustration of the beliefs of Christians about Jesus as the Son of God. There are significant features which gives a message that we can understand ourselves. This passage takes place with just three of the disciples and Jesus on the lower slopes of Mount Hermon a mountain 2,800 feet high on Israel's northern border. 'Whilst on the mountain with Jesus, the three disciples saw that his appearance changed (was transfigured) in front of them. For a brief moment they saw Jesus as he really was the Son of God talking with two most important prophets, Moses and Elijah. ...read more.

This gives relevance and reference to the Christian belief of the title 'Son of God.' There are many other passages which relates to what Christians believe as the Son of God like the Baptism of Jesus (Mark 1: 9-11) where the dove descends from the sky which signifies the Holy Spirit. 'The title Son of God is frequently applied to Jesus Christ in the Gospels and Epistles. In this latter it is everywhere employed as a short formula for expressing His divinity' (Catholic Encyclopaedia). So Christians have many answers to the question what do Christians mean when they refer to the title Son of God and also many passages from Mark's Gospel to give as evidence to their beliefs. They believe Jesus as the Son of God because of the authority and power Jesus has in common with God. ...read more.