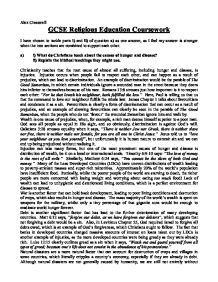 What do Christians teach about the causes of hunger and disease?

Alex Cresswell GCSE Religious Education Coursework I have chosen to tackle parts i) and ii) of question a) as one answer, as I feel my answer is stronger when the two sections are combined to support each other. a) i) What do Christians teach about the causes of hunger and disease? ii) Explain the biblical teachings they might use. Christianity teaches that the root cause of almost all suffering, including hunger and disease, is injustice. Injustice occurs when people fail to respect each other, and can happen as a result of prejudice, which can lead to discrimination. An example of discrimination would be the parable of The Good Samaritan, in which certain individuals ignore a wounded man in the street because they deem him inferior to themselves because of his race. Romans 13:8 stresses just how important is it to respect each other: "For he that loveth his neighbour, hath fulfilled the law." Here, Paul is telling us that us that the command to love our neighbour fulfils the whole law. James Chapter 1 talks about favouritism and condemns it as a sin. Favouritism is clearly a form of discrimination that can occur as a result of prejudice, and an example of showing favouritism can clearly be seen in the parable of The Good Samaritan, when the people who do not 'favour' the wounded Samaritan ignore him and walk by. Wealth is one cause of prejudice, when, for example, a rich man deems himself superior to a poor man. God sees all people as equal in His sight, and so obviously, discrimination is against God's will. Galatians 3:28 stresses equality when it says, "There is neither Jew nor Greek, there is neither slave nor free, there is neither male nor female, for you are all one in Christ Jesus." ...read more.

John 9:13 says, "As Jesus walked along, he saw a man who had been blind from birth. His disciples asked him, "Rabbi, was it his sin or that of his parents that caused him to be blind?" "Neither," answered Jesus, "it was no sin, either of this man or of his parents. Rather it was to let God's work show forth in him."" Jesus wanted us to understand that suffering, far from being God's retribution, is an occasion for God's love to be demonstrated. When Christians provide help and support to those who are hungry and suffering, they can transform suffering into a living example of God's love. b) Using CAFOD or CARITAS, explain how Catholics may respond to world hunger and disease. CAFOD was established in 1962 by Catholic Churches of England and Wales. It is a Christian relief and development agency that helps very poor people overseas. In John's gospel it says, "Children, our love must not be just words or mere talk, but something active and genuine." John is emphasising the fact that Christians should not just want to help the poor, but actually get out there and do it. Obviously it is impractical for many Christians to physically travel abroad and 'help' the poor, especially seen as 'help' has such a broad meaning. CAFOD gives Christians the ability to indirectly help the poor by sending money to buy food and clothes, which will be transported abroad. This is a much more focused and specific goal for Christians, rather than merely the vague and unachieveable idea of 'helping the poor', which could mean literally anything. The Second Great Commandment is "Love your neighbour as you love yourself" which is the basis of Christianity. ...read more.

Here, Jesus was not telling us to literally 'lay down our life' for someone, but simply to put our own life to one side and consider the needs of others, and to pray for them. John 15:12 says, "This is My commandment, that you love one another as I have loved you." It does not matter whether or not we know the person that we have a responsibility for as a Christian, and John 4:19 supports this idea when it says; "We love Him because He first loved us." This means that we should love another person because that person is a part of Christ, and Christ loves us. From another point of view however, it is not always easy to show responsibility to those who are beyond our physical reach e.g. starving children in Rwanda. For example, our parents are responsible for us, and up to a certain age, they must provide us with everything we need in order to be fulfilling their responsibility to the fullest. So if we, as Christians, are not literally providing our 'neighbour' with everything they physically need, how can we be fulfilling our responsibility towards them as Christians? If we simply limit ourselves to helping a particular group of people (i.e. the homeless in our local area) are we not showing favouritism towards them, and discriminating against others in need because we are not helping those as well? (i.e. starving people in other countries). The problem is that is it not always practical to provide support to those who live so far away, and this can be compared to the concept of indifference found in the story of Lazarus in the Bible (Luke 16:19-31) when a rich man (i.e. the rich world) ignored the needs of a poor man (i.e. the poor world). ...read more.