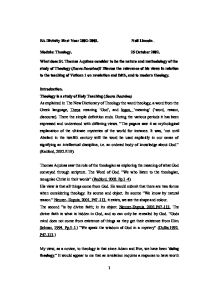 What does St. Thomas Aquinas consider to be the nature and methodology of the study of Theology (Sacra Doctrina)? Discuss the relevance of his views in relation to the teaching of Vatican 1 on revelation and faith, and to modern theology.

BA Divinity First Year 2002-2003. Neil Lincoln. Module: Theology. 25 October 2002. What does St. Thomas Aquinas consider to be the nature and methodology of the study of Theology (Sacra Doctrina)? Discuss the relevance of his views in relation to the teaching of Vatican 1 on revelation and faith, and to modern theology. Introduction. Theology is a study of Holy Teaching (Sacra Doctrina) As explained in The New Dictionary of Theology the word theology, a word from the Greek language, Theos meaning 'God', and logos, 'meaning' ('word, reason, discourse). There the simple definition ends. During the various periods it has been expressed and understood with differing views. "The pagans saw it as mythological explanation of the ultimate mysteries of the world for instance. It was, 'not until Abelard in the twelfth century will the word be used explicitly in our sense of signifying an intellectual discipline, i.e. an ordered body of knowledge about God." (Redford, 2002.P.19). Thomas Aquinas saw the role of the theologian as exploring the meaning of what God conveyed through scripture. The Word of God. "We who listen to the theologian, recognise Christ in their words" (Redford, 2002. Pp.1-4). His view is that all things come from God. He would submit that there are two forms when considering theology. Its source and object. Its source "We know by natural reason." Neuner- Dupuis, 2001, P47-113. it exists, we see the shape and colour. The second "is by divine faith; in its object. Neuner-Dupuis, 2001.P47-113. The divine faith is what is hidden in God, and so can only be revealed by God. "Gods mind does not come from existence of things as they get their existence from Him. Selman, 1994. Pp.5-1.) "We speak the wisdom of God in a mystery" (Dullis.1992. P47-113.) My view, as a novice, to theology is that since Adam and Eve, we have been 'doing theology." It would appear to me that as revelation requires a response to have worth it has to be 'two way' communication, He reveals. ...read more.

(Redford, 2000 P.25) "For St Thomas theology is properly wisdom since things get their order from the end they are for, the wise person will consider the end of things, and this will lead to considering the end of things, of the universe." (Selman, 1994. P.33). Wisdom is a requirement or compliments science it is necessary to use the knowledge we have or gain to the good. To have wisdom is one thing to use it wisely is another. Thomas states that divine science does indeed deal with individual facts to give guidance on moral and other issues. How could it not? 'To achieve the object of defining those whom divine revelation was handed down to us.' Also to discover the detail of. As covered previously to look into the writings of scripture and how they were written. "There is a wisdom, you see residing in humanity, the breath of God conferring intelligence. Great age does not give wisdom nor seniority fair judgement. (Jb 32:8-9.) "I shall utter words of wisdom from the heart; my lips will speak with all sincerity" (Jb 33:3.) "Thus, for Aquinas, in one sense, sacra doctrina is even more Wisdom than it is a science." (Redford, 2002. P.43). Thomas speaks of wisdom as being a gift of God in article six. In article one he would imply that learning is wisdom or that Philosophy is 'love of wisdom'. In whatever way that philosophical sciences depend on human reason. The gift of God becomes the theme in article six. He puts forward the view 'Hierotheus is taught not by mere learning, but by experience of divine things'. Having said this he also explains in article one 'such truths could be known by Philosophy; but they now come under the study of theology or sacred doctrine also, precisely because God has revealed them'. (I.q.1, a.6.) If scripture is revelation to us it has to be correctly interpreted by us. ...read more.

Thomas would appear initially from this school of thought but he adds to it the human historical element. God is not in particular time He is time therefore, He communicates or reveals with those of a particular historical situation. God then can enter humanity at any time to any group. The way Thomas argues clarifies thought through what has been revealed by God in history for them to act on in the present and the future whilst considering the past. The present view of the church would seem to say that neither science or religion should consider itself better than the other. That in fact they should listen to the views of each for the good of each. This is not to say that in any way that they loose their identity or integrity on the road to discovery. They must leave themselves open to the insights of others in openness to enhance their own perspective. This is in my opinion in effect what Thomas did in the extracts from the Summa. His considerations always look at the alternate view. They are expressed openly in his method for conclusion. Is there a right or wrong view to theology? My view is that there is in as much that we 'take a view'. There is not in as much as we have not concluded on the subject and as God is infinite probably never will. So it can only be the methodology that we take a view on. At this stage and with very limited knowledge I would lean towards Thomas. Why? Because he uses and explains his views in a supported way of explanation. That is not to say that by any means his writings are infallible it is that I cannot dispute by fact or faith with him. With time and exploration this currant view of mine may change or not as my understanding and knowledge evolves. Maybe this is what 'doing theology' is all about. As Thomas explains I am receiving baby food, I am not on solids yet. Word Total. 4473. ...read more.