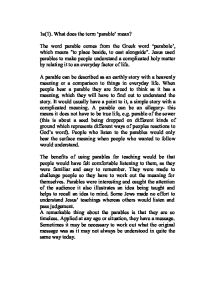 1a(1). What does the term 'parable' mean? The word parable comes from the Greek word 'parabole', which means "to place beside, to cast alongside". Jesus used parables to make people understand a complicated holy matter by relating it to an everyday factor of life. A parable can be described as an earthly story with a heavenly meaning or a comparison to things in everyday life. When people hear a parable they are forced to think as it has a meaning, which they will have to find out to understand the story. It would usually have a point to it, a simple story with a complicated meaning. A parable can be an allegory- this means it does not have to be true life, e.g. ...read more.

Sometimes it may be necessary to work out what the original message was as it may not always be understood in quite the same way today. 1a(2). Describe from Luke's gospel, how Jesus presented his teachings through parables. I will now explain 3 of what Jesus' parables meant, from Luke's gospel. 1.The parable of the sower (Luke 8:1-15). This parable talks about the different ways people heard God's word. Seeds were planted on different kinds of ground and they were all taken off in different ways. The word of God is like the seed because when it is planted in people's hearts new spiritual life grows. This parable teaches what will happen to God's word when it was preached. Sower: Minister/Priest Path: Some people are distracted from taking Christianity seriously. ...read more.

He work with pigs and lived on what they were eating. He then decided to go home and tell his father that he had sinned against God and against him. His father said to him he was happy that he came back and he is happy because his son was lost and now he is found. He then celebrated which his brother was jealous of. 3.The lost sheep (Luke 15:1-7) This story was about a man who had 100 sheep and 1 went missing. He went and looked for it. When he found it he carried it home on his back and he called his friends and neighbours together to rejoice finding his sheep. Some of Jesus' listeners would have kept sheep and would have known that a shepherd values each sheep and knows each sheep. Sheep have a tendency to wonder and get lost. Jesus called himself "the good Shepherd" who would lay down his life for the sheep. ...read more.