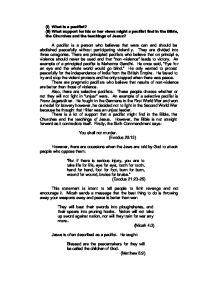 What is a pacifist

(i) What is a pacifist? (ii) What support for his or her views might a pacifist find in the Bible, the Churches and the teachings of Jesus? A pacifist is a person who believes that wars can and should be abolished peacefully without participating violently. They are divided into three categories. There are principled pacifists who believe that on principle, violence should never be used and that "non-violence" leads to victory. An example of a principled pacifist is Mahatma Gandhi. He once said, "Eye for an eye and the whole world would go blind." He only wanted to protest peacefully for the independence of India from the British Empire. He fasted to try and stop the violent protests and he only stopped when there was peace. There are pragmatic pacifists who believe that results of non-violence are better than those of violence. Also, there are selective pacifists. These people choose whether or not they will not fight in "unjust" wars. ...read more.

This statement is intent to tell people to limit revenge and not encourage it. Micah sends a message that the best thing to do is throwing away your weapons away and peace is better than war: They will beat their swords into ploughshares, and their spears into pruning hooks. Nation will not take up sword against nation, nor will they train for war any more.. (Micah 4:3) Jesus is often described as a pacifist. He taught: Blessed are the peacemakers for they will be called the children of God. (Matthew 5:9) Also, when he was arrested in the Garden of Gethsemane, his disciples wanted to defend him: When Jesus' followers saw what was going to happen, they said, "Lord, should we strike with our swords?" And one of them struck the servant of the high priest, cutting off his right ear. ...read more.

The second is this: "Love your neighbour as yourself." (Mark 12: 30-31) And Love your enemies and pray for those who persecute you. (Matthew 5:39) Also, agage, is a technical term used for Christian love, the purely spiritual love of one person for another. This love corresponds to the love of God for mankind. Some Christians, such as Quakers (The Religious Society of Friends), are totally opposed to fighting and during warfare they are conscientious objectors, they refuse to join the armed forces when required to do so and any other part of the "war effort". However, others help in humanitarian tasks such as driving ambulances. However, the Methodist Church teaches that war is contrary to the spirit, teaching and purpose of Jesus Christ. However, Jesus did not condemn the Centurion or even Pilate himself for being part of the military arm. Instead he reminded Pilate that he had received his authority from a greater power and remained accountable to that power. ...read more.