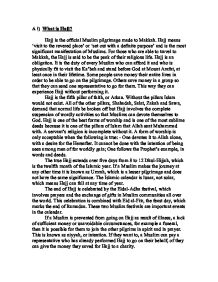 A i) What is Hajj? Hajj is the official Muslim pilgrimage made to Makkah. Hajj means 'visit to the revered place' or 'set out with a definite purpose' and is the most significant manifestation of Muslims. For those who are able to travel to Makkah, the Hajj is said to be the peak of their religious life. Hajj is an obligation. It is the duty of every Muslim who can afford it and who is physically fit to visit the Ka'bah and stand before God at Mount Arafat, at least once in their lifetime. Some people save money their entire lives in order to be able to go on the pilgrimage. Others save money in a group so that they can send one representative to go for them. This way they can experience Hajj without performing it. Hajj is the fifth pillar of faith, or Arkan. Without the pillars Islam would not exist. All of the other pillars, Shahadah, Salat, Zakah and Sawn, demand that normal life be broken off but Hajj involves the complete suspension of wordly activities so that Muslims can devote themselves to God. Hajj is one of the best forms of worship and is one of the most sublime deeds because it is one of the pillars of Islam that Allah sent Muhammad with. A servant's religion is incomplete without it. A form of worship is only acceptable when the following is true: - One devotes it to Allah alone, with a desire for the Hereafter. It cannot be done with the intention of being seen among men of for worldly gain; One follows the Prophet's example, in words and deeds. The true Hajj extends over five days from 8 to 12 Dhul-Hijjah, which is the twelfth month of the Islamic year. If a Muslim makes the journey at any other time it is known as Umrah, which is a lesser pilgrimage and does not have the same significance. ...read more.

It is also an opportunity to reflect upon oneself, and to meet many Muslims, who are doing the same, which shows the unity, strength and the universality of Islam. Ihram - The clothes for Ihram symbolise three things: equality, single-mindedness and self-sacrifice. The clothes are white to disguise any kind of personality and to show they are equal with their neighbours. Ihram is meant to remind Muslims of death, where rank, wealth and appearance are forgotten. Tawaf - It is reported that Adam originally built this shrine, although it deteriorated over time. On the foundations Ibrahim and Isma'il built a square sanctuary out of rough stone. It had no roof and the walls were only about two feet high. It became known as the Ka'bah (cube). When a pilgrim circles the Ka'bah it symbolizes their love for God. The Ka'bah is basically an empty structure, but it represents the unity of Muslims because it is the focal point within the world for all Muslims to face when they pray. Sa'yi - The seven laps from As-Safaa to Al-Marwah symbolize Hajar's search for water. She ran between the tops of the hills and just when she had given up hope of finding water for her child, Isma'il, a well appeared near him, called the Zam-Zam well. When Hajar did this it symbolized the soul's desperate search for that which gives it true life. When Muslims perform Sa'yi it symbolizes patience and perseverance, especially when being performed in the summer. Standing on Mount Arafat - This was where God forgave Adam and Eve their sins and they were brought back to his love and protection. To stand here on 9 Dhul-Hijjah is the most important part of Hajj and it is said that there is no other time when Allah is most likely to listen to prayers than here. If this is done with spiritual awareness, the pilgrim can be forgiven all their sins and are promised paradise. ...read more.

Hajj is also a requirement that a Muslim must fulfil at least once in their lifetimes, and it is one of the pillars of Islam and therefore a very important part of their faith. The Muslim would say that physically going on the pilgrimage is one of the most important religious experiences that they can have. This means that it is in fact more important to a Muslim to go on a physical journey to prove their true dedication to God, rather than try and go on a spiritual journey within, although some Muslims would say that the Hajj is a journey within as well as a physical journey and therefore it is important to go on the pilgrimage as it achieves both of these spiritual experiences. Muslims would also feel that it is only a true pilgrimage if you endure the physical hardships in order to visit the holy shrine and prove yourself to God. It is not a sin for a Muslim to be proud of the achievement of going on Hajj and to recognise that they have overcome a physical challenge in order to strengthen their faith. I think that while some aspects of a pilgrimage are journeys within rather than physical journeys, it is also important to actually go and visit the place of holy significance. This is because making a journey and reaching your destination can make you feel as if you are actually doing something to prove your dedication and commitment to your faith, and the fact that you recognise that being close to God is something that you should strive for rather than take for granted. I also think that physically visiting a site where many people of the same religion as you are all congregated for the common purpose of becoming a better person within their faith and being the best servant to God as they can creates a feeling of having embarked on a spiritual and moving experience, which one could not undergo whilst just sitting at home. ...read more.