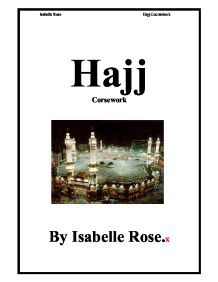 What is Hajj? and what does it involve?

Hajj Corsework By Isabelle Rose.X The Hajj; The Hajj is probably the largest most spectacular and interesting gathering of people all at one time in one place in the world. Every year about two million Muslims travel to Mecca, the holiest place in Islam. The city of Mecca, in present-day Saudi Arabia, is the holy city for Muslims because it was the birthplace of the prophet Muhammad the founder of Islam. Muhammad lived in Mecca until he had a revelation from God, which his companions wrote down in Arabic in the Qur'an, the holy book of Islam, Muhammad also died in Mecca. The Ka'aba, Islam's holiest shrine, is a large cubical building at the centre of the Grand Mosque in Mecca, Saudi Arabia. It is the principal destination of Muslim pilgrims performing the Hajj; Pilgrims circle the Ka'aba and attempt to kiss a small black stone believed to have been kissed by the Prophet Muhammad. The Ka'aba is a large, black granite stone structure set on a marble base. ...read more.

The Pilgrimage costs thousand of pounds and many Muslims will find it very hard to afford it. Some Muslims might be fortunate to go as Muslim community's put money together to help the less fortunate to take part in the hajj. There is a lot of preparation which is very important to Muslims this includes of saving money for the pilgrimage, planning the journey, obtaining a visa from the Saudi Arabian Embassy, booking tickets and finding accommodation. Another very important thing Muslims have to prepare for is the ihram wearing the correct clothing, the ihram is a white seamless garment this is similar to the sheet worn by Muhammad. It indicates the brotherhood and equality and purity of the pilgrim, although for women the ihram clothing often consists of their normal modest dress. I got these images from Google images. The main pilgrimage takes during hajj although there is a lesser pilgrimage this takes place anytime in the year Muslims are required to perform the Umrah, the lesser pilgrimage. ...read more.

After the sacrifice, the pilgrims return to Makkah to end the formal rites of Hajj by performing a final tawaf and sa'i. I got this image from Google images. There are many reasons for Muslims to go to Mecca, as it says in the Qur'an it welcomes people to the Ka'bah. [Qur'an; 2:125] We have rendered the shrine (the Ka'aba) a focal point for the people, and a safe sanctuary. You may use Abraham's shrine as a prayer house. We commissioned Abraham and Ismail: "You shall purify my house for those who visit, those who live there, and those who bow and prostrate." The Hajj is one of the five pillars of Islam and it is the duty of every Muslim to go on the Hajj at least once in their life time to follow the footsteps of Muhammad. The hajj or pilgrimage to Makkah is a central duty of Islam whose origins date back to the time of Prophet Ibrahim. It brings together Muslims of all races. Mecca was also Muhammad's birthplace and Muhammad emphasized the pilgrimage. ?? ?? ?? ?? Isabelle Rose Hajj Coursework ...read more.