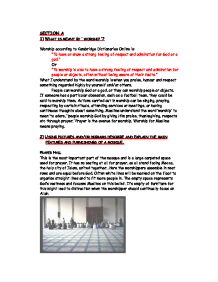 SECTION A 1) WHAT IS MEANT BY ' WORSHIP '? Worship according to Cambridge Dictionaries Online is: "To have or show a strong feeling of respect and admiration for God or a god." Or "To worship is also to have a strong feeling of respect and admiration for people or objects, often without being aware of their faults." What I understand by the word worship is when you praise, honour and respect something regarded highly by yourself and/or others. People can worship God or a god, or they can worship people or objects. If someone has a particular obsession, such as a football team, they could be said to worship them. Actions carried out in worship can be singing, praying, respecting by certain rituals, attending services or meetings, or having continuous thoughts about something. Muslims understand the word 'worship' to mean 'to adore,' 'people worship God by giving Him praise, thanksgiving, respects etc through prayer.' Prayer is the avenue for worship. Worship for Muslims means praying. 2) USING PICTURES AND/OR DIGRAMS DESCRIBE AND EXPLAIN THE MAIN FEATURES AND FURNISHINGS OF A MOSQUE. PRAYER HALL This is the most important part of the mosque and is a large carpeted space used for prayer. It has no seating at all for prayer, as all stand facing Mecca, the holy city of Islam, united together. Here the worshippers assemble in neat rows and are equal before God. Often white lines will be marked on the floor to organise straight lines and to fit more people in. The empty space represents God's vastness and focuses Muslims on this belief. It's empty of furniture for this might lead to distraction when the worshipper should continually focus on Allah QUIBLA WALL This is the wall that faces Mecca. In this wall is a niche or alcove known as the mihrab. It tells the worshipper where Mecca is and has been carefully built to face this way as the Muslim must always face Mecca to say prayers. ...read more.

Wudu symbolises an inner and outer, physical and mental, body and soul cleansing. It is a preparation or turning to God. The washing is always done in a quiet prayerful manner, for it is in itself part of the act of worship. While washing, Muslims pray that they will be purified from the sins they have committed by hand or mouth and that they will be empowered to do good and refrain from evil, and that they should walk on the right path and not go astray. If water is not available, the worshipper can perform a dry wash known as taymmum, which simply involves touching clean earth and wiping over the face, hands and arms in an imitation wash. Wudu is broken by sex or discharge (blood, seminal fluid, faeces or wind). Women in child birth or menstruating are excused salah. MINBAR On the right of the mihrab is the minbar, the platform from which the imam gives the khutbah sermons. These can be very simple, or highly ornate. The simplest ones are usually just a couple of carpeted steps with a small platform at the top. Ornate minbars can consist of a high flight of stairs, beautifully carved and decorated. The prophet Muhammad (pbuh) made this so he could stand on a slightly risen platform to enable the worshippers to see him when he gave his sermons on a Friday, it is continued as tradition. This is the place where the imam stands to deliver his sermons and read passages from the Qur'an. Often the focus of the sermon can be based on an issue to relate to the Muslim community. This shows the importance of preaching and hearing the word of God in Islam. MINARET This is a tall tower built so it rises above the mosque. The tower reaches out towards heaven and so points towards Allah, but is also firmly rooted in the earth. ...read more.

By uttering these names the worshipper becomes more aware of the presence and inner reality of God. Muslims may also read Qur'an at home, studying the sacred teachings, hoping to gain inspiration and guidance from them. In summary, Salah is compulsory for Muslims, and is the act of praying five times a day. Du'a is private and personal prayer outside these five times and is not obligatory. Salah is mainly praising and thanking God, and asking for his forgiveness, in a more formal setting. Du'a by contrast is largely personal requests and is often spontaneous. On Fridays men are expected to form a congregation for the midday prayer in the mosque. All adult male Muslims are expected to leave their worldly activities and attend. In Muslim countries all shops and businesses close during the midday hour on Fridays. The Qur'an commands that Friday prayers are held. Before they begin, the imam will give two short talks called the khutbah, usually based on verses from the Qur'an or the Hadith or some subject of interest to the people. The Friday prayer consists of only two rak'ahs led by the imam and facing the Qiblah wall, after which people pray individually and then go back to work. Meeting with other Muslims is an expression of unity and brotherhood. Communal prayer is very supportive if in your own mind you should wander from prayer, as you are encouraged by seeing others continuing in prayer. Everyone stands closely together in lines and everyone is equal at the time of prayer. Communal prayers remind the Muslim of the importance of the whole Muslim community, providing encouragement and strength, as well as obeying the command of Allah in the Qur'an to meet together. It is a great encouragement to face the coming week, knowing there are others who follow the same path. In a country where you may be in a minority it brings a sense of unity and strength. Worship and prayer is important to a Muslim in many ways. ...read more.