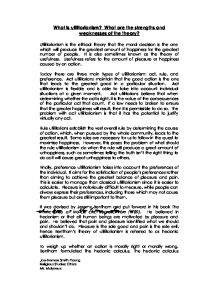 What is utilitarianism? What are the strengths and weaknesses of the theory?

What is utilitarianism? What are the strengths and weaknesses of the theory? Utilitarianism is the ethical theory that the moral decision is the one which will produce the greatest amount of happiness for the greatest number of people. It is also sometimes known as the theory of usefulness. Usefulness refers to the amount of pleasure or happiness caused by an action. Today there are three main types of utilitarianism: act, rule, and preference. Act utilitarians maintain that the good action is the one that leads to the greatest good in a particular situation. Act utilitarianism is flexible and is able to take into account individual situations at a given moment. Act utilitarians believe that when determining whether the act is right, it is the value of the consequences of the particular act that count. If a law needs to broken to ensure that the greater happiness will result, then it is permissible to do so. The problem with act utilitarianism is that it has the potential to justify virtually any act. Rule utilitarians establish the vest overall rule by determining the course of action, which, when pursued by the whole community, leads to the greatest result. Some rules are necessary for us to follow in the quest to maximise happiness. ...read more.

The theory seems to conflict with the idea of human rights. Utilitarianism can be used to provide grounds for denying basic rights such as freedom of speech, freedom from torture, or even life itself. However, we know that these basic rights provide a basis in our morality for the way we act towards each other, therefore to go against them would surely be immoral? This was further developed by John Rawls. He argued that utilitarianism is too impersonal. In its pursuit of the greater good, utilitarianism disregards the rights of the individual. Utilitarianism could be used to promote a dictatorship, in which personal decisions were made to over-ride the interests on the individual in favour of the greater good of society. He believes that utilitarianism is therefore flawed. John Stuart Mill tried to solve this problem of the neglect of the well-being of the individual with his theory of utilitarianism. He argued that the well-being of the individual is of greatest importance, and the happiness is most effectively gained when individuals are free to pursue their own ends, however these are subject to rules that protect the common good of all. He believed that this problem could be solved by focusing on qualitative pleasures, rather than quantitative ones as in Bentham's theory. ...read more.

Furthermore, it is sensible to link morality with happiness. Moral decisions result in the happiness of the person, whether it is immediately or in the future, however it is the happiness of all people, which no ethical theory can promise to produce. Finally, no special wisdom is needed to apply the hedonic calculus. It is an ethical theory that is accessible to everyone and doesn't require you to be highly educated to understand it. Perhaps this could be why it is highly attractive to many people. In conclusion, utilitarianism aims to produce happiness. It is an unselfish ethical theory as it takes into consideration the community rather than the individual; however I believe its greatest strength is also its greatest fault. By taking into consideration the greater community rather than the individual it is eliminating the concerns of the minority and it is here where immoral behaviour can creep in. The hedonic calculus can be used to justify any action; no matter how horrendous it is, as long as it produces the greatest amount of good for the greatest number of people. Therefore, I do not believe utilitarianism to be an ethical theory that should be adopted by the masses, rather solely be organisations as it is the simplest means to make a decision where the majority can agree on. ?? ?? ?? ?? Jae-Tremae Smith-Young Religious Studies: Ethics Ms. Molyneux ...read more.