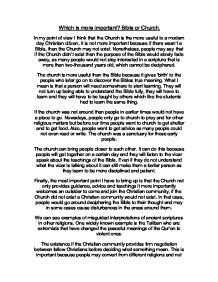 Which is more important. Church or Bible? The church is more useful than the Bible because it gives birth to the people who later go on to discover the Bibles true meaning.

Which is more important? Bible or Church.

In my point of view I think that the Church is the more useful to a modern day Christian citizen, it is not more important because if there wasn’t a Bible, then the Church may not exist. Nonetheless, people may say that if the Church didn’t exist then the purpose of the Bible would slowly fade away, as many people would not stay interested in a scripture that is more than two-thousand years old, which cannot be deciphered.

The church is more useful than the Bible because it gives ‘birth’ to the people who later go on to discover the Bibles true meaning. What I mean is that a person will need somewhere to start learning. They will not turn up being able to understand the Bible fully, they will have to learn and they will have to be taught by others which like the students had to learn the same thing.

If the church was not around then people in earlier times would not have a place to go. Nowadays, people only go to church to pray and for other religious matters but before our time people went to church to get shelter and to get food. Also, people went to get advice as many people could not even read or write. The church was a sanctuary for those early people.

The church can bring people closer to each other. It can do this because people will get together on a certain day and they will listen to the vicar speak about the teachings of the Bible. Even if they do not understand what the vicar is talking about it can still make them a better person as they learn to be more disciplined and patient.

Finally, the most important point I have to bring up is that the Church not only provides guidance, advice and teachings it more importantly welcomes an outsider to come and join the Christian community, if the Church did not exist a Christian community would not exist. In that case, people would go around deciphering the Bible to their thought and may in some cases cause disturbances in the areas around them.

We can see examples of misguided interpretations of ancient scriptures in other religions. One widely known example is the Taliban who are extremists that have changed the peaceful meanings of the Qur’an to violent ones.

The existence if the Christian community provides firm negotiation between fellow Christians before deciding what something mean. This is important because people may convert from different religions and not understand anything or they may be a lost Christian on the pathway to confusion who needs to be corrected and placed on the wider more truthful and accurate pathway.