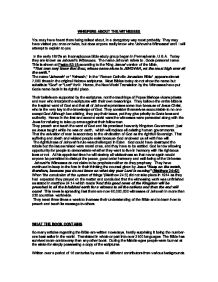 Whispers About the Witnesses.

WHISPERS ABOUT THE WITNESSES You may have heard them being talked about, in a derogotory way most probably. They may have visited you once or twice, but does anyone really know who 'Jehovahs Witnesses' are? I will attempt to explain to you In the early 1870's an inconspicuous bible study group began in Pennsylvania, U.S.A. Today they are known as Jehovah's Witnesses. The name Jehovah refers to , Gods personal name. This is shown at Psalm 83:18 according to the 'King James' version of the bible, "That men may know that thou, whose name alone is JEHOVAH, art the most high over all the earth." The name 'Jehovah' or ' Yahweh,' in the ' Roman Catholic Jerusalem Bible' ,appears almost 7,000 times in the original Hebrew scriptures. Most Bibles today do not show the name but substitute "God" or "Lord" for it. Hence, the New World Translation by the Witnesses have put Gods name back in its rightful place. Their beliefs are supported by the scriptures, not the teachings of Popes Bishops vicars priests and men who interpret the scriptures with their own reasonings. They believe the entire bible is the inspired word of God and that all of Jehovahs promises come true because of Jesus Christ, who is the very key to the knowledge of God. They consider themselves accountable to no one except God Although law abiding, they pay their taxes, yet they give priority to Gods laws and authority. Hence in the first and second world wars the witnesses were persected along with the Jews for refusing to take up arms against their fellow man. ...read more.

person should go to the place of their birth to register themselves for tax purposes as some might have had to make a long journey this would not have been made during the winter time. Luke 2:8-11 shows that the shepherds were in the field at the time of Jesus birth, during the winter months the animals would have been put in a shelter during the night. Matthew 2:1-16 shows that a star led the atrologers (wise men) first to King Herod and than to Jesus and that then Herod sought to have Jesus killed. No mention is made that anyone other than the astologers saw the star. After they left Jehovah's angel warned Joseph to flee Egypt to safeguard the child Was the star a sign from God or was it from someone seeking to have the child killed?? The bible does not say that the astrogers found the babe Jesus in a manger as depicted in Christmas art, when they arrived Jesus and his parents were living in a house as to Jesus age at that time, based on what Herod learned from the astrologers ordered every boy baby under the age of two to be destroyed. Also we need to note that nowhere in the bible does it give a date as to the birth of Jesus Christ. How did the roman church fix then on the date of 25th December there are many innumerable festivals during the Roman and Babylonian times that can account for this date. ...read more.

In Jesus's teaching in 'The Sermon on the Mount he showed the way to true happiness, how to settle disputes instructions on how we should pray, the wisest attitude to have towards material needs, the Golden Rule for proper relationships with others how to detect religious frauds and how to have a secure future. Its councel on how to have a sucessful marriage, preventing juvenile delinquency and how to gain and keep friends is far superior to any books or councelors on our mental health and pyschology. There are articles on how the Red Sea might truly have parted due to a volcanoe erruption, the Ten Plagues did exist, and the virgin Mary was a real person but she was raped by a soldier which was covered up by saying her baby was a gift from God. Then there was what I read recently, and somewhat cynically, entitled 'cracking the code.' Michael Drosnin claims to have discovered hidden messages by means of computer analysis of the Hebrew Scriptures. Certain words, numbers and spaces are skipped to reveal hidden messages. These messages refer to important historical events which could not have been known about when the scriptures were written such as the rise of Hitler, mans conquest on the moon and the Gulf War. Most people seem to find these theories and suggestions much easier to believe than the concept of there being a Creator of the Universe who prformed miracles. But true or not, it is evident that with this book the Bible comes a sense of peace, wellbeing and happiness to those that study its words, what I believe to be a miracle in itself. ...read more.