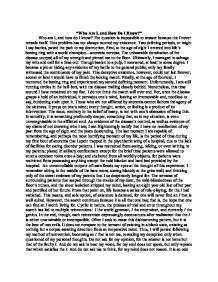 "Who Am I, and How Do I Know?" Who am I, and how do I know? The question is impossible to answer because the I never reveals itself. This problem has not always taunted my existence. Two defining periods, or might I say battles, paved the path to my destruction. First, at the age of eight I entered into life's boxing ring with a world champion-anorexia nervosa. The unbearable domination of the disease usurped all of my strength and pinned me to the floor. Ultimately, I managed to salvage my wits and call for a time-out. Though beaten to a pulp, I recovered, at least to some degree. I became a pro at hiding any evidence of my battle to the general public; only my family witnessed the continuance of my pain. This deceptive existence, however, could not last forever; sooner or later I would have to finish the boxing match. Finally, at the age of fourteen, I reentered the boxing ring and experienced my second defining moment. ...read more.

An uncontrollable outpour of tears floods my eyes at the thought of this experience. I remember sitting in the middle of the bare room, staring blankly at the grim wall, and thinking only of the sweet embrace of my parents that I so desperately longed for. The screams of surrounding patients that seeped through the cracks of my door, the cold-bloodedness of the floor's nurses, and the sheer isolation stripped my mind, leaving an eight year old lost of her past and petrified of her future. From that point on, life became a series of role-playing, for the I had vanished. This means, and sole option, of existence is damned, for one will never find an I that is well suited. However, the search continues because it is all that one has; that is, the hope that one can find an I worth living for. Cyclic in nature, the process of trial and error throughout my search has led to multiple reinventions: I the world gymnast, I the entertainer, and currently I the genius. ...read more.

This process recycles, continuing through adulthood, into old age, and at last, ceases at death. The theory is partisan in respect to the issue of "nature vs. nurture." Does genetics determine the I? Or is the I a product of socialization? Descartes claims, "I think, therefore I am." Sure, one may think, but does one think for oneself or as someone that one is not. A person thinks only of what he has learned, and the thoughts he has learned is not his; thus, no thought belongs to man. But where did the thought begin? In the minds of Adam and Eve, or in the shock of the Big Bang, or in the wind of a spirit-it is a mystery awaiting an answer that does not exist. In reason, however, genetics is the probable architect of an individual's I. And in the same manner of a gene, an I can become latent. To conclude, you ponder, "Who Am I." I am no one. A body without an essence. A mind without a view. A gene without expression. "How do I know?" Because I am empty. In Mind and in Heart. ...read more.