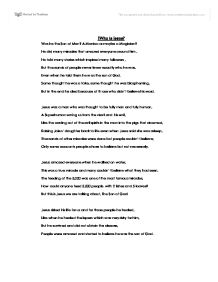 lWho is Jesus? Was he the Son of Man? A Maniac or maybe a Magician? He did many miracles that amazed everyone around him, He told many stories which inspired many followers, But thousands of people never knew exactly who he was, Even when he told them he was the son of God. Some thought he was a fake, some thought he was blaspheming, But in the end he died because of those who didn't believe his word. Jesus was a man who was thought to be fully man and fully human, A Superhuman saving us from the devil and his evil, Like the casting out of the evil spirits in the man into the pigs that drowned, Raising Jairus' daughter back to life even ...read more.

The Last Supper was the start of the end of his life, He understood it was his father's plan to have him crucified, Even if it meant one of his followers would betray him for a bag of gold coins, He said 'one of you sitting here at the table will betray me'. Peter replied saying he wouldn't but Jesus knew what the future would bring. Judas couldn't forgive himself for what he had done, And so he took his own life, Accepting a bag of Gold coins for Jesus' life was what he did, And he couldn't live with that sin forever. Praying in the Garden when the soldiers come, Jesus knew his life was so near death but he knew he would rise again, Judas kissed him and Jesus said, 'are you betraying me with a kiss?' ...read more.

When Jesus died they put him in a tomb and guarded it, But three days later when the three women came to rub oil on him, They found he had gone; they couldn't believe. Mary broke down and cried, A man walked up to her and asked her why she was crying, When Jesus said 'Mary' she instantly looked up and realised it was Jesus, No one she knew said her name like him; she spread the news about what had happened. Some people in today's society believe that God doesn't exist As modern science and technology believe in human evolution, I believe myself that it is blasphemous as I believe God is God and everything came from him, I believe in God and loving God. I believe Jesus was here on Earth 200 years ago. ...read more.