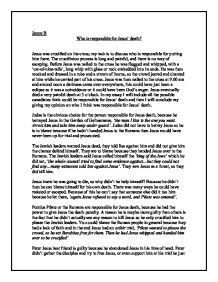 Who Is Responsible For Jesus&amp;#146; Death?

Jenny B Who is responsible for Jesus' death? Jesus was crucified on the cross; my task is to discuss who is responsible for putting him there. The crucifixion process is long and painful, and there is no way of escaping. Before Jesus was nailed to the cross he was flogged and whipped, with a 'cat-of-nine-tails', long whip with glass or rock embedded into its ends. He was then mocked and dressed in a robe and a crown of thorns, so the crowd jeered and chanted at him while he carried part of his cross. Jesus was then nailed to the cross at 9.00 am and around noon a darkness came over everywhere, this could have just been a eclipse so it was a coincidence or it could have been God's anger. Jesus eventually died a very painful death at 3 o'clock. In my essay I will include all the possible canadiates think could be responsible for Jesus' death and then I will conclude my giving my opinion on who I think was responsible for Jesus' death. ...read more.

You could blame the Roman people in general because they had a lack of faith and in the end Jesus had an unfair trial, 'Pilate wanted to please the crowd, so he set Barabbas free for them. Then he had Jesus whipped and handed him over to be crucified' Peter Jesus best friend is guilty because he abandoned Jesus in his time of need. Peter didn't gather the disciples and try to free Jesus, or even support him at his trial he just completely disowned Jesus, 'before the cock crows twice, you will say three times that you do not know me' God is the main reason Jesus died, so he is the one responsible for Jesus death. God wanted his only son to die just so he could be together with everyone else and it was Gods fault in the first place. He created Adam and Eve, he gave them the temptation and so he caused them to sin, the first sin and the basis for all to come. ...read more.

Because everyone who has ever committed sin pushed God further away, they are responsible because Jesus came to Earth to remove those sins and reunite everyone with God. I have looked at each person responsible, an I think that God is responsible for Jesus death, but I do not think he is too blame, I think everyone is to blame because we should have believed him and seen the greatness that was inside him. What I do believe is that Jesus had to die, I understand he was a sacrifice, and it must have been very hard for God to give up his son for the rest of man. If I had to give up my son, I do not think I would, son for Jesus to die for his father and God to give up Jesus it shows how much everyone means to them. Obviously I think it's wrong to kill, but I believe Jesus had to die, otherwise we would not live like we do today, I believe it was justified. ...read more.