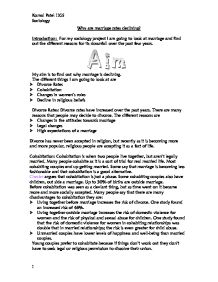 Why are marriage rates declining?

Why are marriage rates declining? Introduction: For my sociology project I am going to look at marriage and find out the different reasons for its downfall over the past few years. My aim is to find out why marriage is declining. The different things I am going to look at are > Divorce Rates > Cohabitation > Changes in women's roles > Decline in religious beliefs Divorce Rates: Divorce rates have increased over the past years. There are many reasons that people may decide to divorce. The different reasons are > Changes in the attitudes towards marriage > Legal changes > High expectations of a marriage Divorce has never been accepted in religion, but recently as it is becoming more and more popular, religious people are accepting it as a fact of life. Cohabitation: Cohabitation is when two people live together, but aren't legally married. Many people cohabite as it is a sort of trial for real married life. Most cohabiting couples end up getting married. Some say that marriage is becoming less fashionable and that cohabitation is a good alternative. Chester argues that cohabitation is just a phase. Some cohabiting couples also have children, out side a marriage. Up to 30% of births are outside marriage. Before cohabitation was seen as a deviant thing, but as time went on it became more and more socially accepted. Many people say that there are many disadvantages to cohabitation they are: > Living together before marriage increases the risk of divorce. One study found an increased risk of 46%. > Living together outside marriage increases the risk of domestic violence for women and the risk of physical and sexual abuse for children. One study found that the risk of domestic violence for women in cohabiting relationships was double that in married relationships; the risk is even greater for child abuse. > Unmarried couples have lower levels of happiness and well-being than married couples. ...read more.

But I feel that the interviews that I did do went excellently. If I had more time I think that I would expand my research- I could do marriage rates within different ethnicities, or I could have done the divorce rates of different ethnic people. I think that by doing a pilot study questionnaire really helped as I could improve it. After doing the pilot study I changed my questionnaire so that I was more understandable. One of the changes that I made was that I numbered and lettered my questions, making it easier to fill out. On the whole I feel that my research went smoothly and that I obtained accurate results through my research. Results of Questionnaire- why are Marriage Rates Declining? 1.Why do you think Divorce Rates are increasing? Yes No 18 17 A) People are getting married at a young age? 28 7 B) Divorce is becoming easier legally? 20 15 C) Because people have high expectations of their marriage, and are disappointed when these expectations are not met? Yes No 18 17 A) Should cohabiting couples have children? 28 7 B) Do you think that Cohabitation is more popular than marriage? 26 9 C) Do you think that most cohabiting couples eventually get married? 3. Some people believe that marriage has declined due changes in religious beliefs Yes No 20 15 A) Is religion another reason why marriage is declining? 18 17 B) Do you think only religious people get married? 22 13 C) Do you think most of the people that divorce, are non-religious? 4. Another reason that marriage has declined is because women are becoming equal to men, and are successful at work Yes No 24 11 A) Do you think that successful women are less likely to get married? 29 6 B) Do you think that marriage is a big responsibility? 19 16 C) Do you think that a women's career is becoming more important than getting married? 21 14 D) Do you think that marriage is declining because women are becoming breadwinners, and are more independent? Komal Patel 11GS Sociology 1 ...read more.