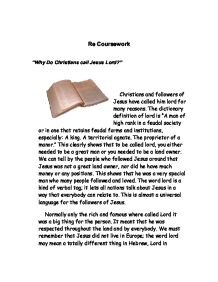 Why Do Christians call Jesus Lord?

Re Coursework "Why Do Christians call Jesus Lord?" Christians and followers of Jesus have called him lord for many reasons. The dictionary definition of lord is "A man of high rank in a feudal society or in one that retains feudal forms and institutions, especially: A king. A territorial agnate. The proprietor of a manor." This clearly shows that to be called lord, you either needed to be a great man or you needed to be a land owner. We can tell by the people who followed Jesus around that Jesus was not a great land owner, nor did he have much money or any positions. This shows that he was a very special man who many people followed and loved. ...read more.

In Hebrew and in Jesus' time, the word Yehovah (Jehovah) was a word which you were descried if you said, or mentioned it. It was used to describe God and anybody high religion If you were caught saying the word you would be either stoned to death or hanged. The miracles that Jesus performed where performed through God. God helped Jesus to perform his miracles. The most important miracles that Jesus performed were the nature miracles. He performed these miracles to all people, of all races. The miracles have many hidden meaning in them; we can all learn things from the miracles that he performed. One such miracle is when he healed the woman with the hemeridge. This woman was an outcast, she could not walk down the street without being shouted at or mugged. ...read more.

They occupied Israel and the surrounding countries. The Romans went on to ban Christianity after Jesus died. Jesus was summoned to the centurion's house and healed the man. This is a good miracle with many meanings; it shows us again that when Jesus did not look at a man and see colour or creed but he saw an equal Human being. This shows us that racism should be abolished and that we should not judge people by their appearance. This is only one reason that the Christians called Jesus Lord. In modern day Christians in church still talk about God and Jesus as Lord. We do not mean that Jesus was a great land owner, or that he was very wealthy, we mean that he was a great man that treated everybody as equals. From Jesus' teaching we can learn to love everybody. The word Lord also throws a lot of respect onto Jesus. 742 Words Dom Jones 10A ...read more.