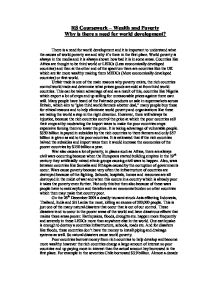 Why is there a need for world development?

RS Coursework - Wealth and Poverty Why is there a need for world development? There is a need for world development and it is important to understand what the causes of world poverty are and why it's there in the first place. World poverty is always in the media and it is always shown how bad it is in some areas. Countries like Africa are thought to be third world or LEDCs (Less economically developed countries) and then at the other end of the spectrum there are countries like the UK which are far more wealthy making them MEDCs (More economically developed countries) or first world. Unfair trade is one of the main reasons why poverty exists, the rich countries control world trade and determine what prices goods are sold at from third world countries. This can be taken advantage of and as a result of this, countries like Nigeria which export a lot of crops end up selling for unreasonable prices against there own will. Many people have heard of the Fairtrade products on sale in supermarkets across Britain, which aim to "give third world farmers a better deal," many people buy these for ethical reasons and to help eliminate world poverty and organizations like these are taking the world a step in the right direction. ...read more.

The amount poor countries owe richer countries has risen by $2.9 billion because of the interest rate. Live 8, which was a concert held on the 2nd July 2005, was organized to take place during the time of the G8 summit, at which it was being decided whether to drop the debt of Africa or not. Clearly the public want their tax payers money to go to Africa and help them because they know the interest rates are unreasonable and are not helping the world poverty problem because debts can cause poverty. Diseases such as AIDS and HIV are spreading uncontrollably in poor countries because they don't have the education or resources to become aware of the risks and dangers. There are less adults than children in South Africa for example because so many die of the diseases therefore there are a large amount of children that need financial support but not enough adults to provide this, this is essentially poverty. By 2010 it is estimated that one out of four South African children would have lost there parents, only rich countries can help this situation. ...read more.

Article 25 of the Universal Declaration of Human Rights states that "Everyone has the right to a standard of living adequate for the health and well-being of himself and his family, including food, clothing, housing and medical care and necessary social services." This right is violated billions of times a day, some people in Africa have hardly any of the things mentioned in this article. World development is the only way that the rights can be obeyed and respected. Sometimes poor countries feel that its unfair that they have a poor quality of life whilst richer countries have a much better quality of life so they often revolt. The 9/11 attack of 2001 can be perceived as a revolt against a rich country. If the world is not balanced and the people are not satisfied war break out which then causes more poverty as explained before. Therefore it seems sensible to develop the world to prevents these things from occurring. So it can be said that there is definitely a need for world development and that world development can solve many of the world's key problems. In the words of Victor W. Watton, "World development is the way to bring not only world prosperity, but also world peace." ...read more.