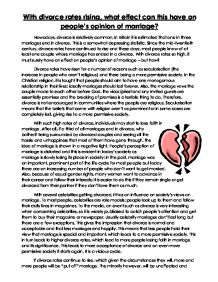 With divorce rates rising, what effect can this have on peoples opinion of marriage?

With divorce rates rising, what effect can this have on people's opinion of marriage? Nowadays, divorce is relatively common; in Britain it is estimated that one in three marriages end in divorce. This is a somewhat depressing statistic. Since the mid-twentieth century, divorce rates have continued to rise and these days, most people know of at least one couple whose marriage has ended in a divorce. With divorce rates so high, it must surely have an effect on people's opinion of marriage - but how? Divorce rates have risen for a number of reasons such as secularisation (the increase in people who aren't religious) and there being a more permissive society. ...read more.

With such high rates of divorce, individuals may start to lose faith in marriage. After all, if a third of all marriages end in divorce, why bother? Being surrounded by divorced couples and seeing all the hassle and unhappiness that most of them have gone through, the idea of marriage is shown in a negative light. People's perception of marriage is distorted and this is evident in today's society as marriage is slowly losing its place in society: in the past, marriage was an important, prominent part of the life cycle for most people but today there are an increasing number of people who don't want to get married. Also, because of equal gender rights, many women want to advance in their career and follow their interests; it is easier to do this if they remain single or get divorced from their partner if they don't love them as much. ...read more.

Usually celebrity marriages don't last long but there are a few exceptions. This gives the impression that divorce is normal and acceptable and that less marriages end happily. This means that less people hold their view that marriage is special and important, which leads to a more permissive society. This in turn leads to higher divorce rates, which lead to more people losing faith in marriage and its significance. This leads to more acceptance of divorce and an even more permissive society it starts again. It is a vicious cycle. If divorce rates continue to rise, which given the circumstances they will, more and more people will be "put off" marriage. The minority however, will be unaffected and continue to believe in marriage and that the cases of divorce are just bad luck and incompatibility. Njeri Chege ...read more.