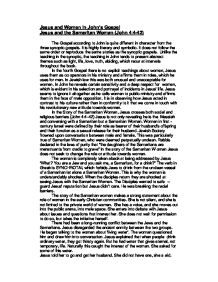 Jesus and Women in John's Gospel Jesus and the Samaritan Woman (John 4:4-42) The Gospel according to John is quite different in character from the three synoptic gospels. It is highly literary and symbolic. It does not follow the same order or reproduce the same stories as the synoptic gospels. Unlike the teaching in the synoptic, the teaching in John tends to present abstract themes such as light, life, love, truth, abiding, which recur at intervals throughout the book. In the fourth Gospel there is no explicit teachings about women, Jesus uses them as co operators in his ministry and affirms them in roles, which he uses for men. In Jewish law this was both unusual and unacceptable for women. In John he reveals certain sensitivity and a deep respect for women, which is evident in his selection and portrayal of incidents in Jesus' life. Jesus seems to ignore it altogether as he calls women to public ministry and affirms them in the face of male opposition. It is in observing how Jesus acted in contrast to his culture rather than in conformity to it that we come in touch with his revolutionary new attitude towards women. ...read more.

Jesus disregarded the ancient enmity between the two groups. He began talking to the woman about 'living water'. The woman questioned him and drew him into conversation. Jesus explained that when people drink ordinary water, they got thirsty again. But he had water that gives eternal, not temporary, life. Naturally this caught the interest of the woman. She asked for some of this water. Jesus told her to go and get her husband. She did not have one, she said. You have had five husbands, said Jesus, but the man you are living with now is not your husband. We know she is Practical, a Samaritan, Curious, sexually promiscuous, an outcast among Jews and from her own. She is isolated and alienated; Jesus knows all this and yet still does not care because he sees something in her - curiosity. Why didn't she run or leave. She says: "I know the messiah will come, when he will proclaim al things to us" This is her statement of faith; even though she is an outcast she still has belief of her own people. This is the First time in John Jesus saying he is the Messsiah. ...read more.

The woman had persuaded them to believe in Jesus. In this, she acted as an apostle, going out to tell people about Jesus, and bringing them to him. 'Many Samaritans from that city believed in him because of the woman's testimony "He told me everything I have ever done". So when the Samaritans came to him, they asked him to stay with them, and he stayed there two days.' The Samaritans invited him to stay, and he stayed for two days. Many people believed in Jesus, not just because of the woman, but because they have seen for themselves that Jesus was the Saviour of the world. The fact that Jesus revealed himself to the Samaritan woman is significant when one considers that she led an outcast life. She had been rejected from the minority group and the fact that she was also seen as inferior because she was a woman. Jesus decided to make his first revelation about himself to someone not even regarded as a person by society and whom people thought unworthy and incapable of hearing such things. Jesus treated her as an equal and valued her questions and opinions. He refused to conform to traditional views and laws. John implies that the hour has come when even women may be messengers of the Kingdom. ...read more.