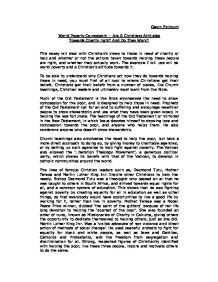 World Poverty Coursework - Are A Christians Attitudes Towards Charity right? And Do They Work?

Gavin Pickburn World Poverty Coursework - Are A Christians Attitudes Towards Charity right? And Do They Work? This essay will deal with Christian's views to those in need of charity or help and whether or not the actions taken towards helping these people are right, and whether they actually work. The example I will use will be world poverty and a Christian's attitude towards it. To be able to understand why Christians act how they do towards helping those in need, you must first of all look to where Christians get their beliefs. Christians get their beliefs from a number of places, like Church teachings, Christian leaders and ultimately most learn from the Bible. Much of the Old Testament is the Bible emphasises the need to show compassion for the poor, and is designed to help those in need. Prophets of the Old Testament call for an end to suffering and encourage wealthier people to show stewardship and use what they have been given wisely in helping the less fortunate. The teachings of the Old Testament or mirrored in the New Testament, in which Jesus devotes himself to showing love and compassion towards the poor, and anyone who helps them. He also condemns anyone who doesn't show stewardship. Church teachings also emphasise the need to help the poor, but take a more direct approach to doing so, by giving money to charitable agencies, or by setting up such agencies to help fight against poverty. The Vatican also allowed the 'Liberation Theology Movement', a generous political party, which shares its beliefs with that of the Vatican, to develop in catholic communities around the world. The lives of famous Christian leaders such as, Desmond Tutu, Mother Teresa and Martin Luther King Jnr. Inspire other Christians to help the needy. Bishop Desmond Tutu was a theologist who passed on all that he was taught to others in South Africa, and strived towards equal rights for all, and a common system of education. ...read more.

These three stories show that according to the Christian faith, as told by the Bible, and well respected figures of Christianity, to be a good Christian, you should show stewardship, by helping anyone less fortunate, and giving up what you do not need and sacrifice things, in doing so. It also shows that you should treat people less fortunate than yourself as an equal rather than look down at them because they are in need of your help. Now that we know where Christians get their beliefs from, and why they act how they do towards people in need, I will use the next part of the essay to determine how Christians apply their beliefs in situations where there are lots of people in need of help. To do this I will describe two scenarios in which a natural disaster has forced countries into poverty. In early February 2000, weeks of torrential rain and cyclonic winds left hundreds of thousands homeless in Mozambique. Southern Mozambique was the worst hit of the country, with heavy rain and rising water levels destroying traditional mud houses, water supplies, cattle and crops. Roads and bridges were ruined leaving thousands stranded in trees or on surviving rooftops, trying to flee the water. Death tolls rose throughout mid February and many more are killed from lack of food and medication. By the 22nd, the full force of the tropical cyclone devastated more of the country, with winds totalling 160mph bringing the flood zone to the size of the Netherlands. The international community eventually sent �25,000,000 worth of aid supplies to the country, and the Tearfund Disaster Response Team (DRT) helped set up camps, and sent its own personal donation, totalling �69,500 in plastic sheeting, jerry cans and a vehicle. They also sent in Water and Sanitation engineers to try and improve the situation. A cancellation in debts was called for the country, but only the U.K. ...read more.

They could be told about the importance of cleanliness in water and food, and money from donators could help them build clean, safe wells. Perhaps money could help the countries develop a proper government, and the could negotiate with more economically developed countries, about their debts and compromise ways of paying them off, so that the countries can get back on their feet, rather than be ruined by debt. This could result in the country becoming more self reliant and independent, which shows that, long term aid, if used properly and efficiently can help a less economically developed country greatly. Personally, I agree with both statements in different ways. I agree that long term aid can help educate people, and give them the right tools to develop decent lived for themselves, and effectively, save lives. But I think that in some situations, this might not work, and a different approach might have to be taken in helping them. I Also agree with the first statement that short term aid may not work overall, as it is only temporary. But, I think that in some situations it is vital, like in the scenarios discussed earlier, or in situations like War, in which people need help and aid urgently to survive, before they can start rebuilding their lives. On a smaller scale, I also agree with the Christian view of stewardship. I think that a person who is more fortunate than others should use what he or she has to help those who are less fortunate. I also think that if someone asks for help, and they deserve it, then help should be given. So, overall I agree that a Christian's belief on Charity on a whole, including charitable agencies, and issuing help when it is needed, are completely correct. Perhaps some aspects of the Christian belief seem dated or wrong, but I think that when it comes to their attitudes towards helping people, they are spot on. ...read more.