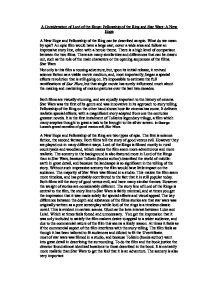 A consideration of Lord of the Rings: Fellowship of the Ring, and Star Wars: A New Hope.

A Consideration of Lord of the Rings: Fellowship of the Ring and Star Wars: A New Hope

A New Hope and Fellowship of the Ring can be described as epic. What do we mean by epic? An epic film would have a large cast, cover a wide area and follow an impressive story line, often with a heroic theme. There is a high level of comparison between the two films. There are many similarities and differences that can be drawn out, such as the role of the main characters or the opening sequences of the films.

Not only is this film a rousing adventure, but, upon its initial release, it revived science fiction as a viable movie medium, and, most importantly, began a special effects revolution that is still going on. It's impossible to estimate the full ramifications of Star Wars, but that single movie has surely influenced much about the making and marketing of motion pictures over the last two decades.

Both films are visually stunning, and are equally important to the history of cinema. Star Wars was the first of its genre and was innovative in its approach to story telling.

Fellowship of the Ring on the other hand shows how far cinema has come. It delivers realistic special effects, with a magnificent story adapted from one the centuries greatest novels. It is the first instalment of Tolkeins legendary trilogy, a film which many sceptics thought to great a task to be brought to the silver screen. in George Lucas's grand narrative of good versus evil, Star Wars.

A New Hope and Fellowship of the Ring are two types of epic. The first is science fiction, the second fantasy. Both films tell the story of good versus evil.

They are move innocent and naïve, especially Luke. Luke wants to leave his uncles farm because it is bleak and mundane. We sense Luke’s burning desires to leave the Force – religious connotations

a  AUDIENCE FEELA STRONG AFINNITY TO THEM. BECAUSE THEY ARE YOUNG WE SEE THEM GROW AND EDEVELOP . main characters of the films are both young men. The main character of A New Hope is a young man by the name of Luke Skywalker. Luke is essentially the hero of the film. Luke is initially presented to us as a simple farm boy. As the film progresses we learn that Luke does not what to follow in his fathers footsteps, but wishes to become a pilot. The adventure of Luke Skywalker follows the classic stages of a hero’s journey. A farm boy from backwater planet of Tatooine, Luke is pulled from obscurity into a world of adventure when two unusual droids appear in his life carrying a hidden message from a mysterious princess. With the aid of a wise guide, Obi-Wan Kenobi, Luke gains a mystical knowledge of the Force, enlists rugged companions, Han Solo and Chewbacca, and crosses the galaxy to find the princess.

They represent all that is good, and are the films heroes. However by no means to intend to follow that path. But that is where the similarities end. Luke is different to Frodo. He wishes to follow in his father’s footsteps, to leave his uncle’s farm and go on adventures. Frodo however wishes to stay in the shire.

He is a keen pilot and is desperate to get out off his uncle farm, to pursue a career in flying.

During Star Wars’ original period of theatrical release, itsspecial effects were described as everything from "eye popping" to "mind blowing". And, indeed, for their time, they were. In fact, they're not bad even by today's standards. …..For instance put Vaseline on the camera lens to smudge out the wheels of the land speeder. Used makeshift –  ….But "not bad" wasn't good enough for Lucas, and his vision of what they should have been fills the screen in the Special Edition. This is most notable during three key sequences: Luke and Ben's entry into the city of Mos Eisley, Han's heretofore unseen hanger bay meeting with Jabba the Hut, and the final attack on the Death Star. However, in scenes both with and without effects improvements, Star Wars is just as compelling and invigorating a movie experience today as it was when it first came out, and the new stuff blends in seamlessly with the old.

Since 1977, there have been many science fiction movies, but none has managed to equal Star Wars' blend of adventure, likable characters, and epic storytelling. Like some indefatigable King of the Hill, it stands alone and triumphant, regardless of the many imitators that assail its position. As is true of Citizen Kane, Casablanca, and Gone with the Wind, Star Wars will endure long after its creators are gone. And watching this new edition today is like coming home after a long journey and finding everything just as you remember it -- if not better.

Back UpStar Wars is especially memorable because its story of spacefaring pilots and their daring escapades is based on an ancient form of mythology--the "hero's journey." Underneath the flash and dazzle of special effects is the magic of myth, a shape-shifting realm where heroes, monsters, wizards, and magic talismans dwell in labyrinths of discovery. This exhibition examines the mythology beneath the Star Wars story, a hero's journey that takes place "a long time ago in a galaxy far, far, away...."