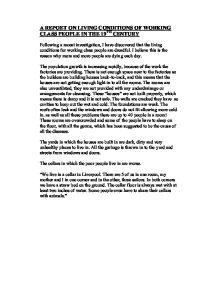 A Report On Living Conditions of Working Class People In the 19th Century.

A REPOET ON LIVING CONDITIONS OF WORKING CLASS PEOPLE IN THE 19TH CENTURY Following a recent investigation, I have discovered that the living conditions for working class people are dreadful. I believe this is the reason why more and more people are dying each day. The population growth is increasing rapidly, because of the work the factories are providing. There is not enough space near to the factories so the builders are building houses back-to-back, and this means that the houses are not getting enough light in to all the rooms. The rooms are also unventilated, they are not provided with any underdrainage or arrangements for cleansing. These "houses" are not built properly, which means there is damp and it is not safe. ...read more.

"We live in a cellar in Liverpool. There are 5 of us in one room, my mother and I in one corner and in the other, three sailors. In both corners we have a straw bed on the ground. The cellar floor is always wet with at least two inches of water. Some people even have to share their cellars with animals." Several families share the privies. There is no drainage for the waste to be taken to the sewers, but they have a cesspit, which is not cleared out by night-soilmen because the landlords do not want to pay the night-soilmen to clear the cesspit so the are left to overflow. Sometimes they are not cleared for six months. This causes the most terrible smells imaginable. This also leads to diseases. ...read more.

The water in front of the house has collected from various sources. The yard has never been dry since they came to it. There is a sump-hole, a great depth in one corner, made by the landlord, to take away the water, but it is full of deposit. The stench is often so bad, and especially after rain, that he and his wife cannot bear the smell." Cholera is no the only disease which is caused by polluted drinking water. Other diseases are:- Rheumatism Bronchitis TB Typhus Typhoid But cholera is the worst of them all. Cholera has had the highest death rate. It has been suggested that the contaminated pump on Broad Street is the source for the spread of cholera. ...read more.