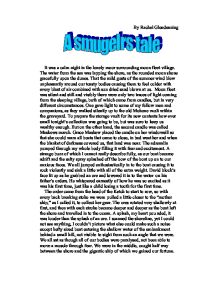 By Rachel Glendenning It was a calm night in the lonely moor surrounding moon fleet village. The water from the sea was lapping the shore, as the rounded moon shone gracefully upon the dunes. That the mild gusts of the summer wind blew unpleasantly around our toasty bodies causing them to feel colder with every blast of air combined with sun dried sand blown at us. Moon fleet was silent and still and visibly there were only two traces of light coming from the sleeping village, both of which came from candles, but in very different circumstances. One gave light to some of my fellow men and companions, as they walked silently up to the old Mohone vault within the graveyard. To prepare the storage vault for its new contents how ever small tonight's collection was going to be, but was sure to keep us wealthy enough. But on the other hand, the second candle was called Maskews march. Grace Maskew placed the candle on her windowsill so that she could warn all boats that came to close, in bad weather and when the blanket of darkness covered us, that land was near. The adrenalin pumped through my whole body filling it with fear and excitement. A strange buzz of which I cannot really describe fully, as our boat became adrift and the salty spray splashed off the bow of the boat up on to our anxious faces. We all jumped enthusiastically in to the boat causing it to rock violently and sink a little with all of the extra weight. ...read more.

We thought that it would be a quick journey to shore, but the time it took, seemed like an eternity. No one could have felt prouder that night than Elzevier Block, his son's eyes sparkling in the moon light, his brown hair shining like gold in the moon light and his wide noticeable smile soon to be shattered under the same moon light. We all quietened down as we started to approach the long stretch of coastline, so that not a sound could be heard apart from the soft stroke of the rotating ore's. Abruptly I heard some one call out ", what is that coming towards us, it is so close and look at the speed it is approaching us!" "It's certainly not one of ours," Block added. We rose to our feet panic stricken and dumbfounded. Men's faces could be seen as clear as if it was day, their little beady eyes looking straight at us and the gleam of their swards glinting in the moonlight. They were approaching at a tremendous speed, so fast, getting so close. "Maskew," whispered Elzevier Block, with no feeling and no surprise within the tone of his voice. "Get down David, don't stay on the boat, a conflict is about to take place, and you should not be a part of it." He said, with a lot more feeling, strength and power within his tone. The revenue boat drew closer, and swards were drawn on both parties. ...read more.

Elzevier tried to get to his feet, but was to slow. I reached out to David to catch him but I was too late, the almighty bang had already occurred and the bullet travelled towards David who was powerless towards it. It all happened so fast; the bullet had pierced young David's heart and as he fell in to the water, I felt a sharp pain in my side. I looked down, to see gouts of blood coming from the lower part of my abdomen. The very same bullet that passed straight through the young boy also passed straight through me. The last sights I saw from the ketch was the strong powerful Maskew looking down at David with the sternest and most pleased of looks on his face and pistol still in the same position of what it was when the shot was fired. And Elzevier Block diving in to the water to grab his son for hope he was still alive. "I knew I could get you right where it hurt, and from your eyes I can see I have succeeded." Said Maskew. As I fell in to the salty water, and the boat disappeared under the sea with all the goods causing me to be dragged under. With only enough energy for me to kick my way back to the surface and cling on to a piece of drift wood, to fall unconscious because of the suffering and pain my side was giving me. I drifted unconsciously to the shore where I was found a day later, half dead, drained of blood and suffering from sever hypothermia. ...read more.