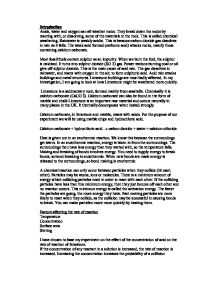 Acids, water and oxygen can all weather rocks. They break down the rocks by reacting with, or dissolving, some of the materials in the rock.

Introduction Acids, water and oxygen can all weather rocks. They break down the rocks by reacting with, or dissolving, some of the materials in the rock. This is called chemical weathering. Rainwater is weakly acidic. This is because carbon dioxide gas dissolves in rain as it falls. The weak acid formed (carbonic acid) attacks rocks, mainly those containing calcium carbonate. Most fossil fuels contain sulphur as an impurity. When we burn the fuel, the sulphur is oxidised. It turns into sulphur dioxide (SO 2) gas. Power stations burning coal or oil give off sulphur dioxide. This is the main cause of acid rain. The gas dissolves in rainwater, and reacts with oxygen in the air, to form sulphuric acid. Acid rain attacks buildings and metal structures. Limestone buildings are most badly affected. In my investigation, I am going to look at how Limestone might be weathered more quickly. Limestone is a sedimentary rock, formed mainly from seashells. Chemically it is calcium carbonate (CaCO 3). Calcium carbonate can also be found in the form of marble and chalk Limestone is an important raw material and occurs naturally in many places in the UK. ...read more.

The few anomalous results within single graphs are not drastically far from the line/curve of best fit; the majority of points are fit the pattern. One problem with the method was the beehive stand. Gas had a tendency to collect under it, causing inaccurate readings. This affected the results by the potential volume of gas not being in the measuring cylinder at the time it was produced. A measuring cylinder is not very accurate. The air at the top when beginning the experiment can jeopardise the results by making reading inaccurate. Although the amount of air at the top at the start can be measured and subtracted from final results, a gas syringe would be more effective. If I did the experiment again I would repeat the experiment a further amount of times in order to gain an accurate mean. I would also use acids mixed on different days to eliminate the possibility of acid that is not the right concentration as happened in this experiment. I think my results are sufficiently reliable to draw my conclusion from, when compared to textbook examples. To find out more about the rate of reaction of limestone, I could compare the effect of concentration with the effects of particle size and temperature. ...read more.