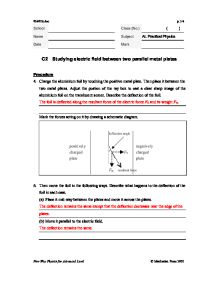 The foil is deflected along the resultant force of the electric force FE and its weight Fw.

Mark the forces acting on it by drawing a schematic diagram.

6.        Then move the foil in the following ways. Describe what happens to the deflection of the foil in each case.

Move it very close to the plates.

charge onto the part of the plate opposite to it.

(d) Move it around between the metal plates to explore the electric field.

7.        Place the foil mid-way between the plates, and change the voltage across the plates. Describe how the voltage affects the deflection of the foil.

electric force on the foil.

8.        Fix the voltage across the plates, vary the separation between the two plates. Describe how the separation affects the deflection of the foil.

The foil deflects at the same angle but towards the opposite side, i.e. the negative plate.

In order to get the accurate deflection angle of the foil, the translucent screen should be

placed perpendicular to the metal plates, and the foil is free to turn about the pin towards

the sides of the metal plates without any friction.

(a) Uniform electric field is produced in between the plates when a voltage is applied.

(b) The separation between the plates and the voltage affect the electric field.

(c) The electric field in between the metal plates was found to 0.38 kV / cm, such that the

foil deflects at about 45o.