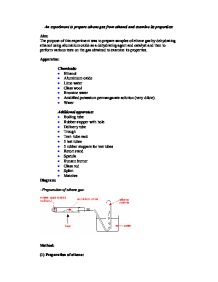 An experiment to prepare ethene gas from ethanol and examine its properties:

The purpose of this experiment was to prepare samples of ethene gas by dehydrating ethanol using aluminium oxide as a dehydrating agent and catalyst and then to perform various tests on the gas obtained to examine its properties.

Add some glass wool to soak up the ethanol, using a glass rod to push the wool down the tube.

Clamp the boiling tube in a horizontal position using a retort stand.

Put a small amount of aluminium oxide about half way along the boiling tube.

Complete the set up of the apparatus as shown in the diagram above.

Light the Bunsen burner, adjust it to a blue flame and heat the aluminium oxide. (Make sure the test tube is filled with water when you start to collect the gas produced.)

Let the bubbles produced escape for a short time (these are mainly bubbles of displaced air). Collect 5 test tubes of the gas and put a stopper on each tube when it is filled.

When the test tubes have all been filled, loosen the retort stand and raise the apparatus so that the delivery tube no longer dips into the water. This avoids suck back of water as the tube begins to cool which could cause the boiling tube to crack. Turn off the Bunsen burner.

(2) Testing the properties of ethene:

Remove the stopper of one of the tubes filled with ethene and apply a light to the mouth of the test tube using a lighted splint.

Allow the gas to burn and when it has stopped burning add a small amount of lime water to the test tube, stopper it and shake the tube a few times.

The limewater should turn milky white, showing that the gas burns in air to produce carbon dioxide.

This is the reaction that occurs:

Replace the stopper and shake the tube a few times.

The yellow/red colour should disappear to form a colourless solution.

In the presence of bromine, bromine is added across the carbon – carbon double bond in ethene to form a colourless alkane called 1,2 – dibromoethane and in the reaction above, when bromine in water is added to ethene, a colourless compound called 2- bromoethanol is produced . This means that adding bromine or bromine water is a common test for unsaturation.

Add about 1/10th of very dilute potassium permanganate solution to one of the test tubes of ethene and shake the tube a few times.

The purple colour of the permanganate solution should disappear to give a colourless solution. (This colour change is evidence for the presence of a carbon to carbon double bond.

The first reaction encountered in this experiment was that for the production of ethene by the dehydration of the alcohol, ethanol, over a heated catalyst, in this case, aluminium oxide:

This is an elimination reaction as water is eliminated. This reaction can also take place by using an acid catalyst such as concentrated sulphuric acid and heating to about 180 degrees. The acid catalysts normally used are either concentrated sulphuric acid or concentrated phosphoric(V) acid, H3PO4. Concentrated sulphuric acid produces inconvenient and rather messy results, however.  Not only is it an acid, but it is also a strong oxidising agent and so it oxidises some of the alcohol to carbon dioxide and at the same time is reduced itself to sulphur dioxide. Both of these gases have to be removed from the alkene before it can be used industrially. These gases which are produced are passed through sodium hydroxide solution to remove the carbon dioxide and sulphur dioxide produced from the side reactions.

In this reaction, the acid first protonates the oxygen atom of the alcohol, forming [CH3CH2OH2]+ , then water is lost which forms a carbocation and finally the hydrogen ions that catalysed the reaction are regenerated. This dehydration reaction is most likely for tertiary alcohols as the carbocation produced is stabilised by the three alkyl groups that are attached to it.

Another example of the dehydration of an alcohol to produce an ethene is the dehydration of cyclohexanol to produce cyclohexene and water. Cyclohexanol is heated with concentrated phosphoric(V) acid and the liquid cyclohexene distils off and can be collected and purified. Phosphoric(V) acid tends to be used in place of sulphuric acid because it is safer and produces a less messy reaction.

Dehydration can also be reversed to produce an alcohol such as ethanol from ethene. This backwards reaction is exothermic and so favours low temperatures and great care must be taken to provide the correct conditions for the desired direction of the reaction so as to produce the desired products.

The second reaction encountered in this experiment was the complete combustion of ethene in oxygen to produce carbon dioxide and water, by the reaction:

This reaction is the same for all hydrocarbons when they are completely combusted in oxygen; carbon dioxide and water are always produced.

The third reaction encountered was the addition of bromine water to ethene, a common test for unsaturation. Bromine dissolves in water to form a yellow/red solution to form what is commonly called “bromine water” and this is used in the “bromine water test” to determine whether a hydrocarbon is unsaturated or saturated. If the substance contains carbon-carbon double/ (triple) bonds, the solution changes to colourless as unsaturated undergo an addition reaction with the bromine water and decolourise the bromine water. If the substance is saturated and contains only carbon- carbon single bonds, he colour of the bromine water remains the same and will be unaffected by the hydrocarbon. Alkenes like ethene are much more reactive than their alkane counterparts because of their unsaturation. Alkenes undergo rapid addition reactions with halogens (e.g. Bromine) across their carbon-carbon double bond whereas alkanes undergo slow substation reaction under extreme conditions such as UV light. The reaction between ethene and bromine, for example, occur almost spontaneously which is an electrophilic addition reaction as an electrophile is attacking an electron rich area.

The fourth and final reaction encountered was the reaction between ethene and dilute acidified potassium permanganate. The permanganate is a purple colour alone but when added to an alkene under acidic conditions it changes to colourless. This is another way other than bromine water of distinguishing between saturated and unsaturated substances, although bromine water is more commonly used for this. Acidified potassium permangate is a very strong oxidising agent and it oxidises an alkene such as ethene. The colour change depends on whether the potassium manganate(VII) is used under acidic or alkaline conditions; when under acidic conditions like in our experiment with dilute sulphuric acid, the purple solution changes to colourless and when made slightly alkaline (usually by adding sodium carbonate solution), the purple solution first becomes dark green and then produces a dark brown precipitate.

When ethene is oxidised by the permanganate ions, ethane- 1, 2-diol is formed and the Mn7+ ions are reduced to Mn2+ ions:

However, the product, ethane-1,2-diol, is itself quite easily oxidised by manganate(VII) ions, and so the reaction won't stop at this point unless the potassium permanganate(VII) solution is extremely dilute, very cold and preferably not under acidic conditions (although then permanganate would not oxidise ethene!) This is why we had to use dilute potassium permanganate solution and means that the reaction is not very useful as a way of preparing ethane-1, 2-diol. The only real use for this reaction is to test for carbon-carbon double bonds, but bromine water is usually used for this.

The results from our experiment seem accurate as they produced results that agree with the structure and usual properties of alkenes as unsaturated hydrocarbons: they combust completely in oxygen to produce carbon dioxide and water, they perform addition reactions and react with bromine water producing a colour change and indicating the presence of their carbon-carbon double bond(s) and they are oxidised by permanganate ions also causing a colour change. All of these chemical properties can be explained in terms of the unsaturation of alkenes. The only real problem we came across was the sucking back of water when we forgot to remove the apparatus from the water after we had finished preparing our samples of ethene. This happened because the boiling tube was beginning to cool as soon as the Bunsen was turned off. Luckily we noticed in time and removed the apparatus from the water before any damage to the tube could be made!

The fact that ethene is insoluble in water due to its bonding was essential for our experiment as the gas was collected over the water without it dissolving.

From this experiment, whose purpose was to prepare the unsaturated gas, ethane, and test its properties, the following conclusions can be drawn:

This reaction is reversible, meaning under certain conditions ethene can be hydrated to form ethanol.

When ethane is combusted, carbon dioxide is produced which was indicated by the change of the lime water to milky white. The reaction that occurred, which is the same for the complete combustion all hydrocarbons, was:

Ethene is a colourless gas that belongs to the homologous series of the alkenes as it contains a carbon – carbon double bond – it is unsaturated.

This reaction with bromine would be as follows:

When reacted with bromine water, as in this experiment, a colourless compound called 2-bromoethanol forms.

This reaction with bromine water would be as follows:

Another way of testing for unsaturation is to add an acidified solution of potassium permanganate solution to oxidise ethene. In this reaction the purple colour of the permanganate changes to colourless.