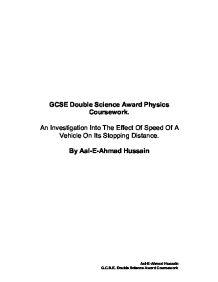 To carry out my study into how speed effects the stopping distance of a vehicle I must first identify the factors that affect the stopping distance. The main factors that will affect the stopping distance of the vehicle are the speed, mass, traction and any friction caused by the vehicle. Speed has relevance because the faster a vehicle is travelling; the longer it takes for it to stop. The mass has significance because the vehicle will be travelling purely on its own accord, along with the help of gravity. The traction is relevant and comes hand in hand with friction caused because the tyres or wheels of the car will be coming in contact with the surface of the ramp and the lino floor. The better grip the tyres have will mean that they create more friction with what they are coming in contact with. Also the friction created on the vehicle chassis and the vehicles front and rear axles will also slow the car.

Acceleration is a numerical description of how the velocity of an object is changing. Imagine sitting in a car that is starting off from a stationary position. You look at the speedometer and watch the needle turn as the car gets faster.

1) In the first experiment I shall change the height of the slope and keep the ramp clearance distance constant. I shall not change the mass of the vehicle in any of my first two experiments.

2) In my second intended experiment I shall change the length of the ramp but the gradient of the ramp shall remain constant.

3) In my third and final experiment I shall keep the length of the slope constant as well as the gradient but shall alter the mass of the vehicle by adding plaster sine.

My apparatus will be set up as below:

For my three experiments I necessitate:

1X Plank of wood to act as ramp.

2X Meter ruler to measure distance travelled by the car from the front end of the ramp.

I shall enter the data I collect from each experiment into a table and then a graph as follows:

Experiment 1: The effect of gradient of ramp on stopping distance.

The car I shall use in this experiment will have a mass of 23.8 grams. I shall keep the clearance distance constant throughout this experiment. I shall select a gradient or rear height for my ramp and record it. I shall then release the car three separate times and write the clearance times and stopping distances into the table and also any other relevant information for each release. I will then do the same on another six different gradients and then plot a graph of my results showing the speed at the bottom in m/s against average stopping distance. All my graphs will show the same.

To calculate the speed at which the vehicle is travelling I shall use the following formula:

To calculate the speed at the bottom I shall multiply the clearance speed by two.

Experiment 2: The effect of clearance distance on stopping distance.

4) Aerodynamics – the shape of an object determines whether the object is streamlined or not. Streamlined objects offer less resistance against movement, which means the vehicle accelerates for a longer period of time and so is travelling faster and will have a greater stopping distance.

There were a few main factors contributing to the errors that occurred in my experiment:

1) My timing of the clearance distance

2) My measuring of clearance distance, stopping distance, gradient and other distances.

To correct these two factors, I could have asked for more assistance in taking readings, etc. and for more accurate equipment and this would have helped greatly.

I could have also created some method of checking the direction of the car such as attaching a piece of string to the rear of the vehicle and this would have helped me visualise the cars’ direction.

If I were to conduct this experiment again or for longer, I could have corrected the inconsistencies by experimenting with the surface area of the cars, the floor I tested everything on, etc. I could have also tried it with real cars but this would have been more time consuming and there aren’t hills that could be used for such an experiment everywhere.