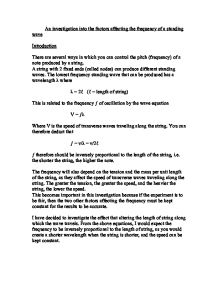 There are several ways in which you can control the pitch (frequency) of a note produced by a string.

A string with 2 fixed ends (called nodes) can produce different standing waves. The lowest frequency standing wave that can be produced has a wavelength λ where

Where V is the speed of transverse waves traveling along the string. You can therefore deduct that

ƒ therefore should be inversely proportional to the length of the string, i.e. the shorter the string, the higher the note.

This becomes important in this investigation because if the experiment is to be fair, then the two other factors affecting the frequency must be kept constant for the results to be accurate.

I have decided to investigate the effect that altering the length of string along which the wave travels.

Using the signal generator which will be connected to either end of the length of wire, different frequencies can be used to create standing waves down different lengths of wire.

I will use different lengths of wire to see what frequency is needed to produce a clean standing wave, which can be seen by the magnet’s field interacting with the electric field causing a movement in the wire at a 90° angle. Therefore it will be obvious at which frequency the wire oscillates also because a note, like a hum, will be produced.

The lengths of wire I will use can be changed from 100 cm to about 40 in 10 cm intervals by measuring with a metre stick, accurate to a mm, to the place on the wire where the moveable node needs to be.

The CRO display was very hard to read off of, and probably increased the inaccuracy. If it had had smaller gridlines, or an indication of where the troughs of the wave were, then the results would have been more accurate.

Altogether, the inaccuracy which is plotted on my graph seems about right, and the experiment could have been improved by using more sensitive equipment, possibly a computer, to show that frequency is inversely proportional to wavelength, i.e.:

This is a well written report that lacks structure.
1. There are several subheadings missing.
2. The table of results needs to be included.
3. The conclusion needs to quote data from the investigation.
4. The evaluation needs to suggest further opportunities.
****