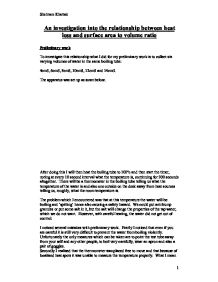 An investigation into the relationship between heat loss and surface area to volume ratio Preliminary work To investigate this relationship what I did for my preliminary work is to collect six varying volumes of water in the same boiling tube: 4cm3, 6cm3, 8cm3, 10cm3, 12cm3 and 14cm3. The apparatus was set up as sown below. After doing this I will then heat the boiling tube to 100�c and then start the timer, noting at every 10 second interval what the temperature is, continuing for 200 seconds altogether. There will be a thermometer in the boiling tube telling us what the temperature of the water is and also one outside on the desk away from heat sources telling us, roughly, what the room temperature is. The problem which I encountered was that at this temperature the water will be boiling and 'spitting' hence also causing a safety hazard. We could put anti bump granules or put some salt in it, but the salt will change the properties of the tap water, which we do not want. However, with careful heating, the water did not get out of control. I noticed several mistakes with preliminary work. Firstly I noticed that even if you are careful it is still very difficult to prevent the water from boiling violently. Unfortunately the only measures which can be taken are to point the test tube away from your self and any other people, to boil very carefully, wear an apron and also a pair of goggles. ...read more.

The last variable is the thickness of the glass in the different sized beakers. Basically the beakers are different sizes and so have different thicknesses of glass. This matters because it will also affect the rate of cooling. This is controlled simply by using the same beaker and putting different, measured, quantities of water in. Hypothesis I hypothesise that large animals have a smaller surface area to volume ratio therefore the beaker with the greatest volume will loose heat the slowest. And that the small animals have a large surface area to volume ratio; this represents the beakers with the smallest volume of water and so the beaker with the smallest volume of water will loose heat the fastest. On the graph the initial rate will be quite quick but then steady out. I.e. it will be curved. I also predict that if you halve the surface area to volume ratio you will halve the initial rate of heat loss also if you halve the volume twice from the initial volume by however much the temperature dropped during the first halved sample it will drop the same again. i.e. if you have 500cm3 to 250cm3 and let's say that the temperature dropped by 8�C I predict that if you halve that 250cm3 to 125cm3 the temperature will drop by 8�C again. As shown in the above diagram I hypothesise that if you halve the volume of the water you will also halve the initial rate of heat loss. ...read more.

I would have expected this to happen straight away. This would probably be due an experimental error; as far as I can explain, I heated the beaker and when I stopped and started timing, although I had taken the Bunsen burner away, the water was still being heated and then started to cool. This is possible but only for a few seconds not 50 seconds. Evaluation Although the experiment proved my prediction correct but only to a certain extent I believe that my results were incorrect and so led me to an incorrect conclusion. My results suggest that the initial rate of heat loss is slow and it speeds up after about 50 seconds. Either my results are incorrect or I haven't got enough of them. What I mean by this is that maybe I should have continued timing the heat loss for another 200 or so seconds. I am suggesting this because I believe that there is a strong possibility that if I based the rate on the whole graph I would have come out with proof that my prediction was in fact true. Therefore this would mean that the curve would appear later on and the results which I have do not represent a curve at all but in actual fact the initial rate. I could perform further experimentation to follow up this investigation. I could time the rate at which the water heats up. So instead of heating then timing the cooling rate I simply time the heating rate. This would be simpler and o variables such as room temperature, boiling and so on would be eliminated. Shehram Khattak 1 ...read more.

***
A good account of differences in the rate of cooling of different volumes of water. However, the original aim has been lost sight of and the author seems unsure what the independent and dependent variables actually are.