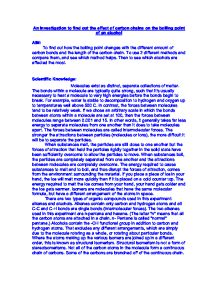 An investigation to find out the effect of carbon chains on the boiling point of an alcohol AIM: To find out how the boiling point changes with the different amount of carbon bonds and the length of the carbon chain. To use 2 different methods and compare them, and see which method helps. Then to see which alcohols are affected the most. Scientific Knowledge: Molecules exist as distinct, separate collections of matter. The bonds within a molecule are typically quite strong, such that it's usually necessary to heat a molecule to very high energies before the bonds begin to break. For example, water is stable to decomposition to hydrogen and oxygen up to temperatures well above 500 C. In contrast, the forces between molecules tend to be relatively weak. If we chose an arbitrary scale in which the bonds between atoms within a molecule are set at 100, then the forces between molecules range between 0.001 and 15. In other words, it generally takes far less energy to separate molecules from one another than it does to take molecules apart. The forces between molecules are called intermolecular forces. ...read more.

This is due to the thermometer only being able to warm up to the heat of the water. The only reason that may explain why there was an anomalous result, is the fact that the same flask was used for all the alcohols. This means it was impure and some left over of the last alcohols may not have been washed out. The previous alcohols may have been heated up instead and affected the result. Also the thermometer may have been at fault, and only a little bit of water may have been pouring through, at not such a steady rate. A way of improving the whole thing would be to use a stand and use it to hold the boiling tube over the Bunsen burner. Here a different alcohol in a boiling tube each could be placed over to boil. This way, we would be able get the actual boiling point of the alcohols. It would be connected to the connecting tube and to a beaker so we could be able to see when the alcohol has boiled or not. This helps mix method 1 and method 2 together. It also helps make sure everything works well, and the heating mantle cannot affect the result. Also, different boiling tubes could be used, so the impurities could be ironed out. ...read more.