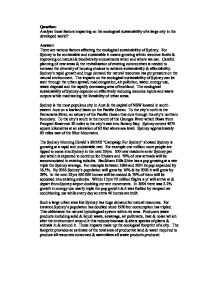 Analyse those factors impacting on the ecological sustainability of a large city in the developed world. Sydney

Question: Analyse those factors impacting on the ecological sustainability of a large city in the developed world? Answer: There are various factors affecting the ecological sustainability of Sydney. For Sydney to be containable and sustainable it means growing within resource limits & improving on natural & biodiversity endowments when and where we can. Careful planning of new areas & the revitalisation of existing communities is needed to increase the diversity of housing choices to achieve sustainability & affordability. Sydney's rapid growth and huge demand for natural resources has put pressure on the natural environment. The impacts on the ecological sustainability of Sydney can be seen through the urban sprawl, road congestion, air pollution, water, energy use, waste disposal and the rapidly decreasing area of bushland. The ecological sustainability of Sydney depends on effectively reducing resource inputs and waste outputs while maintaining the liveability of urban areas. Sydney is the most populous city in Aust & the capital of NSW located in south-eastern Aust on a lowland basin on the Pacific Ocean. To the city's north is the Parramatta River, an estuary of the Pacific Ocean that cuts through the city's northern boundary. To the city's south is the mouth of the Georges River which flows from Prospect Reservoir 20 miles to the city's east into Botany Bay. Sydney covers 4074 square kilometres at an elevation of 62 feet above sea level. Sydney approximately 60 miles east of the Blue Mountains. ...read more.

This is prevalent in areas such as Kellyville and Rouse Hill where the economic gains from housing developments have clearly played a more important role then the ecological sustainability of such complexes. State owned buildings are only compelled to but 6% of their power from renewable energy sources. Energy demand needs to be curbed by weaning Sydney residents off highly polluting coal fired plants with a mixture of gas & renewable energies such as wind & solar. Disposing of solid waste will become more difficult. Landfill has been a traditional solution but this limited within the GSMR. In 2001 the northern suburbs of Sydney ran out of landfill space. Disposing of sewerage & waste water will become more difficult. Every day Sydney empties more then 1 billion litres of poorly treated effluent waste water into the ocean. Sydney sends more then 7 times the amount of primary sewerage into the ocean than any other water utility in the country. There are also significant problems with Bushland. Groups such as the National Parks Association of NSW want to see a "greenbelt" of parks around the city to contain the urban sprawl & protect biological diversity. Parks & open space are scare in the city's west compared with other areas. With the increased density across the city parks, reserves will become more contentious. The planned new suburbs on the fringes of Sydney will subsume agricultural land, with farmers & academics fearing threats to food supply - notably leafy greens, mushrooms & other perishable vegetables. ...read more.

The government is promising a plan to protect agriculture in the Sydney Basin. Although the government must develop tough unambiguous guidelines that give farmers planning certainty & the Department of Infrastructure, Planning & Natural Resources and the authority & incentive to prosecute illegal land clearers. Public transport needs to be transformed into one service run by one agency and integrated services & fares across all modes are needed along with frequent & faster services with standardised stops. Higher & more realistic fares along with a revamp of staffing costs & maintenance are required. There are plans for increased mass transit facilities with increased bus ways & railways. For example $1 Billion is being spent to untangle the city's maze of intersecting lines & mainly to improve the number of trains that arrive on time. Ultimately if Sydney is going to be a sustainable city and have a natural environment to offer future generations then it needs to stop consuming unrenewable resources at such exhaustive rates. The ecologically sustainability of Sydney is affected by road congestion, air pollution, water consumption, energy usage, waste disposal and the falling area of bushland. If each resident in Sydney made a concerted effort to reduce their usage of these vital unrenewable resources and the government provided economic disincentives for the use of such resources then perhaps these factors would impact on the ecological sustainability of Sydney to a lesser extent. ...read more.