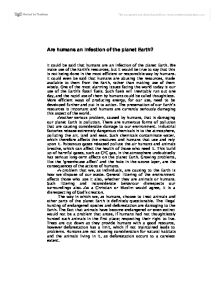 Are humans an infection of the planet Earth?

Are humans an infection of the planet Earth?

It could be said that humans are an infection of the planet Earth. We make use of the Earth’s resources, but it would be true to say that this is not being done in the most efficient or responsible way by humans. It could even be said that humans are abusing the resources, made available to them from the Earth, rather than making use of them wisely. One of the most alarming issues facing the world today is our use of the Earth’s fossil fuels. Such fuels will inevitably run out one day, and the rapid use of them by humans could be called thoughtless. More efficient ways of producing energy, for our use, need to be developed further and put in to action. The preservation of our Earth’s resources is important and humans are currently seriously damaging this aspect of the world.

Another serious problem, caused by humans, that is damaging our planet Earth is pollution. There are numerous forms of pollution that are causing considerable damage to our environment.

A huge problem, which has become more apparent in the last century or so, is the damage humans can cause to our planet Earth by making war. War can result in the complete destruction of entire countries and the precious habitats of animals, as well as the death of millions of humans. Past incidents such as the Hiroshima bomb result in devastating disaster, causing serious damage to the environment.

However humans are not necessarily an infection of the planet Earth. Particularly in recent years, humans have made genuine efforts to protect and preserve the planet Earth. Organisations such as Greenpeace work to help with issues concerning the state of our environment. Many of these organisations who are concerned with the state of our planet Earth are set up by religious groups; which includes Christian and Muslim groups. Environmentally friendly groups are involved in the preservation of our natural habitats and the protection of animals. Other organisations such as the Worldwide Fund for nature and the RSPCA are concerned with the welfare of animals and help to protect them.

I believe that despite this belief that Christians and Muslims share of stewardship, humans are still an infection of the planet Earth. Even though a Muslim or Christian may disagree with this statement, it remains a fact that humans are the cause of serious damage and destruction to the Earth. Muslims or Christians may disagree saying that we are part of God’s creation, and have the intention to protect all of that creation and have been put on the Earth by God to do so. But unless humans, over the entire world, unite as a whole and decide to strictly observe such duties the planet Earth will continue to suffer. Even if there are those who choose to help preserve the Earth, whether they are Muslim or Christian, there are still those who are abusing what we have. Therefore unless serious action is taken, which would begin to dramatically affect the state of the planet Earth, humans will continue to damage it, and be an infection of it.