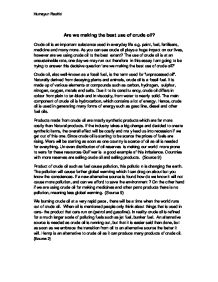 Are we making the best use of crude oil?

Are we making the best use of crude oil? Crude oil is an important substance used in everyday life e.g. paint, fuel, fertilisers, medicine and many more. As you can see crude oil plays a huge impact on our lives, however are we using crude oil to the best extent? The use of crude oil is at an unsustainable rate, one day we may run out therefore in this essay I am going to be trying to answer this decisive question 'are we making the best use of crude oil?' Crude oil, also well-known as a fossil fuel, is the term used for "unprocessed oil". Naturally derived from decaying plants and animals, crude oil is a fossil fuel. It is made up of various elements or compounds such as carbon, hydrogen, sulphur, nitrogen, oxygen, metals and salts. Due it to its constituency, crude oil differs in colour from plain to tar-black and in viscosity, from water to nearly solid. The main component of crude oil is hydrocarbon, which contains a lot of energy. Hence, crude oil is used in generating many forms of energy such as gasoline, diesel and other fuel oils. ...read more.

And we rely on crude oil for many things and this non-renewable fuel is running out fast, so what will happen when it eventually runs out? If you look at the tables they show they show we are low on proven reserves hence the price of crude oil is raising significantly, so unless an alternative is found soon, it will affect the economy, environment and raise social issues. The economy will be impacted as the prices of fuel will rise and the countries with the most crude oil will be rich. Countries which do not have a lot of crude oil will lose a lot of money as it will have to import it from other countries. Social problems such as wars will begin over the last few drops of crude oil. The environment is also facing many problems because of pollutants released from fuels such as crude oil. So after judgment relating to every source and information I have collected, I have come to the conclusion that we are making the best use of crude oil; we are making fuels from it as there is nothing to replace it the need of energy. But I think we should fund research on alternative sources of fuel so that we can stop with crude oil as its damaging the environment and will cause social issues. ...read more.