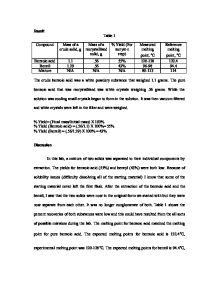 Extraction is an important part of organic chemistry. It is used in many fields to trait soil, fuels, and metals. Extraction is a basic procedure in organic chemistry that is necessary to learn and understand. This lab taught many basic aspects of organic chemistry. It included the chemistry of acids and bases, new lab techniques. Conclusion The results for the experiment showed that compounds were separated from the mixture (in low yield), but both benzil and benzoic acid were not completely separated from the mixture. While this experiment did not give pure products or good yields, if carried out more carefully, extraction can be a useful way to separate a mixture into individual compounds. ?? ?? ?? ?? ...read more.