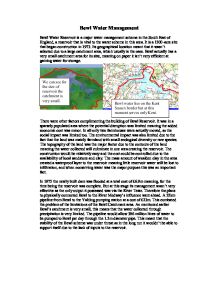 Bewl Water Management Bewl Water Reservoir is a major water management scheme in the South East of England, a reservoir that is vital to the water scheme in this area. It is a 1200-acre site that began construction in 1973. Its geographical location meant that it wasn't selected due to a large catchment area, which usually is the case. Bewl actually has a very small catchment area for its size, meaning on paper it isn't very efficient at gaining water for storage. There were other factors complimenting the building of Bewl Reservoir. It was in a sparsely populated area where the potential disruption was limited meaning the added economic cost was minor. In all only two farmhouses were actually moved, so the social impact was limited too. The environmental impact was also limited due to the fact that the land was mainly farmland with small ecological diversity or rare species. The topography of the land was the major factor due to the contours of the land meaning the water collected will culminate in one area creating the reservoir. The construction would be relatively easy and the cost could be controlled due to the availability of local sandstone and clay. The mass amount of wealden clay in the area created a waterproof layer to the reservoir meaning little reservoir water will be lost to infiltration, and when conserving water was the major purpose this was an important fact. ...read more.

The water companies had already realised the problems of water shortages in the Hastings area. The result is an existing pipe between Bewl and Darwell. This has the capacity to transfer up to 10 million litres of water a day. But the trouble occurs during periods of drought. This is because the pipe is too small in diameter to provide the volume of water required in the Hastings area. The construction is adding a second 17km-long pipeline, which will be able to add a further 25 million litres of capacity between Darwell and Bewl. The advantage of this pipeline over the Yalding pipeline is that it is two way, meaning that in the event of Darwell drying up water could be diverted from Bewl, and vice versa. There are four construction bases storing plant and materials along the route at Bewl Water, Ticehurst, Etchingham and Robertsbridge. This way the water remains uncontaminated and the efficiency of the pipes will be high. With over 2,500 pipes being used the scale of this construction is huge. In addition, a new 12km-long pipeline is being laid from Darwell Reservoir to South East Water's Hazard's Green Water Supply Works. This means that along with a better supply of water, more water will be purified meaning a more efficient water system in the area. Looking at these changes from a management point of view we can see the inputs and outputs will change. ...read more.

* Aligning the route at Kitchenham Farm so that the effect on Kitchenham Forge, an area of archaeological importance, is minimised As stated above, does Bewl have the capacity to manage the water supply and storage of large sections of two counties? Management have realised the possible problem of this and ideas have been thrown around to combat this problem An idea, only years ago deemed ridiculous is now under careful consideration. The idea is to increase the height of the dam and effectively flood the floodplain once more. This would increase the capacity of the reservoir hugely making the task of management much more attainable. Especially with evidence of dryer summer the task of providing the millions of people in the Medway and coastal towns in Kent and Sussex is a huge task. As you can see from the above the effect of increasing the dam by 5m has a major effect on the size and capacity of the river. This would have negative effects such as the relocation of homes and businesses. The nature reserve to the south of the reservoir would be affect meaning the rehabilitation of wildlife in the area. |but as we have seen through the construction of the Darwell pipeline the Bewl Management are careful in construction creating minimal damage to the environment. If this plan goes ahead Bewl influence and importance to the south east will further increase. We have learnt that Bewl is an asset to water management, preserving nature and even tourism. ...read more.