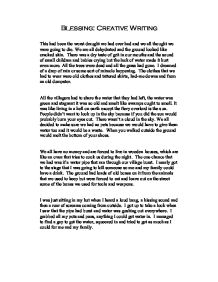 Blessing: Creative Writing This had been the worst draught we had ever had and we all thought we were going to die. We are all dehydrated and the ground looked like cracked skin. There was a dry taste of grit in our mouths and the sound of small children and babies crying but the lack of water made it hurt even more. All the trees were dead and all the grass had gone. I dreamed of a drop of rain or some sort of miracle happening. The clothes that we had to wear were old clothes and tattered shirts, had-me downs and from an old dumpster. All the villagers had to share the water that they had left, the water was green and stagnant it was so old and smelt like swamps ought to smell. ...read more.

I was just sitting in my hut when I heard a loud bang, a hissing sound and then a roar of screams coming from outside. I got up to take a look when I saw that the pipe had burst and water was gushing out everywhere. I grabbed all my pots and pans, anything I could get water in. I managed to find a gap to get the water, squeezed in and tried to get as much as I could for me and my family. It was like a sudden rush of fortune and we all had become millionaires. Some described it as silver rushing out of the pipe. I started to get a shiver up my spine from the coldness of the water. Children ripped their clothes off to play in the water whilst their parents tried to soak up water with their clothes to drip it in their mouths. ...read more.

I looked around at the slightly moist ground and realised that we wasted a lot of the water playing about in it and when it all evaporated off the ground. We had collected less that a tenth of the water that came out. We had this gift from god and we through it in his face by fighting and killing each other instead of acting like the big family we once were. When all the people had gone I notice some people had been stampeded, got stuck at the bottom of the crowd and drowned in the very thing we thought was saving our lives. Which got me thinking what was going to happen when we run out of water again? We will be in the same position we were in before. So was it really a gift from god like I thought or was it a curse from the deepest pits of hell. ...read more.